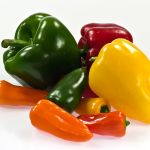 Wonder about the spelling: chili or chile?  See the definitive article in the LA Times: Chili or Chile? Dispute Never Seems to Cool Off (1): “The Los Angeles Times spells the vegetable “chile” and the spicy soup “chili.” The sauce made of chile, onion and tomato? Chile sauce.”

Refer to The Cook’s Thesaurus (2, 3) for a great description, with pictures, of many different chiles, both fresh and dried.  It also suggests reasonable substitutes if you can’t find a particular chile or preparation. 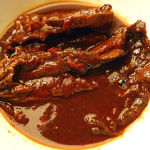 Adobo was originally a marinade used to preserve raw meats. At the same time, the combination of ingredients that include chipotle (smoked red jalapeños) and other chiles, adds lots of flavor to the meat, so that in these days of refrigeration, it is used primarily for its flavor as a marinade and sauce. (1)

Softening Dried Chiles such as Anchos or New Mexico chiles (instead of using fresh chiles): 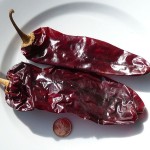 The method used for dried New Mexico chiles (as presented in Kev’s Red Chile Sauce recipe) can be used for any dried chile, and is duplicated here.

Roasting peppers brings out their flavor and sweetness. If you let them steam after roasting, it is easier to remove their skins (if desired) and/or seeds and stems.

The following oven method adapted from Food Network.com (6) and Vegetarian Times (7) can be used for poblanos, floral gem, Anaheim, Fresno, jalapeño, or Anaheim or rocoto peppers. Instructions for bell peppers is from Fine Cooking.com (8).

Wearing gloves while cleaning and prepping fresh and roasted peppers is highly recommended.

This method is from Vegetarian Times (7).

Roast on Grill or under a Broiler

This method is from Vegetarian Times (7) and Fine Cooking (8). This method is quicker but the peppers won’t be as soft as when roasted in the oven.

See my 'About' page
View all posts by Cat →
This entry was posted in Dehydrated, Fat or oil, Grilled, Roasted, Vine veggies and tagged bell peppers, chiles. Bookmark the permalink.