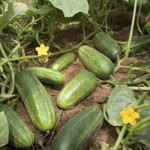 Raitas are common in Indian cuisine, as they are the perfect cooling accompaniment for a spicy curry.

This recipe is adapted from The Vegetarian Epicure by Anna Thomas (1). I make my own yogurt, as I find it has the best sour flavor.  But you can also use commercial plain Greek yogurt.