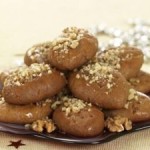 To develop my own Melomakarona recipe, I found 4 recipes online that I could compare. I determined the liquid-to-flour-to-sugar ratio for each recipe, then picked one recipe to use as a starting point (the 4th recipe, from Greek Food.about.com). This recipe had the least amount of flour compared to the liquid and sugar, so that I could add flour as needed to achieve the right texture.

I present the 4 recipes, followed by testing results that achieved the final recipe. Here’s comparison of different recipes, for the cookie dough:

Greek Food (About) recipe (1), makes 24 cookies; I used this recipe for my starting point, but compared to the other recipes, it is a half-recipe. Thus, for the liquid/flour/sugar ratio, I doubled amounts for this recipe only.

I started with the Greek Food.about.com recipe (4th recipe above), using the stated ingredient amounts, including flour as follows:

For combined total of 5 cups.

Test cookies: tested baking 2 cookies.  Baked 20 minutes in my oven; they held their shape, only spreading out slightly.  I tasted one (without honey syrup) – nice crumbly texture and lightly spiced, not too sweet; no changes needed.

Final batch:  Shaped and baked 44 cookies in all (I made them a bit small, 1.5″ balls), then cooled them about 2 hours on my counter.

Syrup:  I prepared the syrup with lemon zest in my electric chicken fryer (325°F to boil 3 minutes, then simmer at 200°F).  Soaked cookies, in 3 batches, about 4 minutes per batch.  They absorbed the syrup wonderfully.

Nut Garnish: Sprinkled them with finely ground walnuts, but found I didn’t need anywhere near 2 cups worth.  About ½ – ⅔ cup would be sufficient.  And I have about 3 cups of syrup left over, stored in a quart jar, for a next batch.

Finally had a chance to make another batch, and use up my honey syrup.  This time I made as revised from previous test (because the previous batch was such a success):  2 ½ cups whole wheat flour, 1 ¼ cups unbleached white flour and 1 ¼ cups semolina, for total of 5 cups flour, along with spices.  Zest of one orange (about 1 ½ tsp), ½ cup orange juice, 1 ½ cups olive oil, and ¼ cup each honey and brandy.  Dough seemed right, although definitely soft and oily.  It took a lot of working with my hands to get it smooth (mostly to get the semolina to soften).

Made 41 cookies (they are slightly larger than last time). Baked about 17 minutes, then cooled on rack 2 hours before soaking in the syrup.  However, I had to turn the cookies over to soak them on the top, because my syrup bath wasn’t deep enough to cover them.  soaked about 3 – 4 minutes each side.

Result:  Slightly bigger but just as wonderful as last time.  Used up almost all of the leftover honey-syrup.

Made a batch with Shelli and her boys, following as written with one exception. She couldn’t find Rapadura Sugar, so bought Coconut Crystals, an unrefined sugar with which I was not familiar. It is darker than Rapadura and had a noticeable molasses flavor in the cookie and syrup that overpowers the orange and spice flavors. I do not recommend coconut crystals for this recipe.

See my 'About' page
View all posts by Cat →
This entry was posted in Alcohol, Baked, Citrus, Fat or oil, Flour, Nuts and seeds, Spices, Sweetener. Bookmark the permalink.