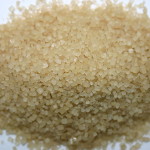 Sugars are in the news a lot these days, especially as scientists and medical professionals warn about the dangers of  HFCS (high fructose corn syrup) consumption, and blame the obesity epidemic on sugars. In this article I discuss the different types of processed dietary sugars, and both natural and artificial sweeteners. See also my article on Stevia.

In more primitive times, sugar was consumed as a whole food, such as sugar cane, maple syrup, honey, and fruits. But in our modern times, sugar is consumed as a highly processed substance in different forms: white sugar, light brown sugar, dark brown sugar,  sugar from GMO sugar beets, corn syrup, HFCS, agave nectar, and so on. Some of these do have their place, but not in the quantities that we now consume them. Our overconsumption of refined sugars has even compromised our tolerance of whole-food sugars.

Sugarcane and sugar beets are our primary sources of sugar used in cooking.  These plants are rich in sucrose, a disaccharide made up of one molecule of glucose bound to one molecule of sucrose.

Commercial planting of GMO sugar beets (for herbicide-tolerance) began in 2008 in the US, and it is now the norm. If you see “sugar” in a list of ingredients, it is likely GMO from sugar beets unless it specifies ‘cane sugar’ or the product is 100% Organic. Buyer beware!

Robert H. Lustig, MD, UCSF Professor of Pediatrics in the Division of Endocrinology, explores the damage caused by sugary foods. He argues that fructose (too much) and fiber (not enough) appear to be cornerstones of the obesity epidemic through their effects on insulin. Series: UCSF Mini Medical School for the Public [7/2009] [Health and Medicine] [Show ID: 16717]

The processing of sugar involves separation of the sugar crystals from the liquid pulp or molasses. This separation, which involves high temperatures, removes all the beneficial nutrients (other than sugar) that were present in the original plant.  That is, the vitamins, minerals, enzymes and other proteins are all stripped away, leaving pure sugar crystals behind.

White sugar: The crystals are then bleached to remove any traces of golden color remaining (from the molasses).  This bleached product is sold as: table sugar, bakers’ or bar sugar (superfine), sugar cubes, and powdered or confectioners’ sugar.

Brown sugar: To produce brown sugar, the bleached product is combined with mild sulfured molasses (molasses treated with sulfur dioxide as a preservative) to make various grades of brown sugar, in an ineffective, sad attempt to restore the lost nutrients to the sugar.

Cane vs beet sugar: Until modern times, sugar was produced from sugar cane. Sugar beets became a major source of sugar in Europe in the mid 1800s, and by 1914, it had become a major source in the US. The sugar from both sources is known as “sucrose,” a di-saccharide of glucose and fructose. Cane sugar is always identified as “cane” on the packaging, but beet sugar does not identify as “beet.” So if your package of sugar just says “sugar,” it is most likely from GMO sugar beets. As of this writing, a GMO cane sugar has not been approved.

Sugar has been implicated as the ’cause’ of type-2 diabetes.  Both type-1 and type-2 diabetics are urged to avoid sugar, as a way of stabilizing blood sugar. Indeed, ingestion of sugary foods does cause spikes in blood sugar levels, which then dive to blood sugar lows recognizable as sleepiness, tiredness, light-headedness, and in extreme cases, lack of coordination, and garbled speech. Sugary foods also cause spikes in blood insulin levels, which may be even more problematic than elevated blood sugar. Note that both minimally processed sugars and processed sugars cause these spikes.

The process used to refine sugar may be responsible for polio! This refining process produces small amounts of deoxysugars, which are believed to play a role in allowing the polio virus to take hold. These substances are not removed from the final product, (See Medical Hypotheses, March 1992). (17)

Sugar is also fairly caloric, prompting many makers of processed foods to develop low-calorie foods by the use of artificial sweeteners such as aspartame and sucralose.  At the same time, these same makers of processed foods push beverages, snacks and condiments rich in high fructose corn syrup (HFCS) which is believed by many researchers to be extremely bad for health, as it disrupts lipid (fat) metabolism and causes rise in blood insulin levels.

Other Forms of Processed Sugars

Bob’s Red Mill brand of Sweet Dairy Whey is a minimally-processed byproduct of cheese making and contains lactose (milk sugar). Lactose is a disaccharide comprised of glucose and galactose.It’s liquid version naturally separates from the cheese curd as a watery liquid during cheese making. It is then filtered and dehydrated at low temperatures; in this regard it is similar to dehydrated sugar cane juice such as Rapadura, but not as sweet (because lactose is not as sweet as sucrose).

Unfortunately, Bob’s Red Mill no longer sells Sweet Dairy Whey; instead they use the whey in their whey protein powder product. I now use either the sweet dairy whey from Barry Farms (see Amazon ASIN B0001JXDL) or Larissa (see Amazon ASIN B07CJNY1HL). However, I don’t know if these are made the same way as Bob’s Red Mill product, so I include it here as a processed sweetener.

This product also contains some of the protein in whey – the watery fraction of milk (as opposed to the fatty, or cream, fraction), but not as much as in whey protein powders. Whey is a desirable dietary protein, although sweet dairy whey does not contain much of it.

How to use sweet dairy whey in recipes

It can be used as a partial sugar substitute; here are some options.

Xylitol and Other Sugar Alcohols

In earlier times, many Native American tribes used xylitol from the sap of birch and beech trees (similar to maple sugar from maple trees), and was minimally processed. But modern versions have issues: they may be dehydrated under high-pressure, and they may be made from GMO corn cobs.

Today, xylitol is made from the biomass of trees, or agricultural waste from processing maize (corn), wheat, or rice (13b). The most common source is corncobs, many of which are from GMO corn. If you use xylitol, be sure to use only brands that are GMO-free.

In recent years, xylitol has become more popular because of its dental benefits; for example, it is a common ingredient in tooth paste.

Other sugar alcohols used as sugar substitutes are mannitol, sorbitol and erythritol, but these are not as sweet as xylitol which has similar sweetness to sucrose (regular sugar).

Dextrose is an older name for glucose, one-half of the common sugar molecule, sucrose (the other half is fructose or levulose).  Glucose is present in two isomeric (geometric) forms:  D-glucose (dextrose) and L-Glucose.  Dextrose is the only bio-active form of glucose, and  has the same caloric value as table sugar (sucrose).

Glucose is less sweet than fructose; the combination (sucrose) is between them in sweetness.

Levulose is an older name for fructose, one-half the the common sugar molecule sucrose (the other half is glucose or dextrose).  Fructose is present in two isomeric (geometric) forms:  D-fructose (levulose) and L-fructose, but only the D-form is bio-active.  It has the same caloric value as table sugar (sucrose). L-fructose (not bio-active) is the form of most of the fructose in HFCS, resulting from conversion from D-glucose to L-fructose by a GMO enzyme. This same GMO enzyme is also used to increase the fructose content of agave nectar.

Fructose is sweeter than glucose and sucrose, and is metabolized differently. Unlike glucose, it is not used for energy production in cells; instead it is sent to the liver to be converted to triglycerides (fat) for storage in fat cells.

Fructose has a lower glycemic index than glucose and sucrose, but recent research indicates it has a negative impact on lipid (fat) metabolism, and so should be used in moderation.

Please note that the corn industry has tried to change the name of HFCS to “corn sugar”; a trick to make you think it’s just the same as sugar. 2013 update: the courts recently ruled that using the term ‘corn sugar’ is deceptive and cannot be used instead of HFCS.

Perhaps the greatest reason to avoid corn sweeteners, is that the corn is highly likely to be GMO, and it is not required to be labeled as such. See Mercola’s article: The Health Hazards of GM Corn for info on a study that shows the harm that GMO corn can do. This study is actually Monsanto’s own study, but the data is re-analyzed by an independent team of researchers.

A difficulty in avoiding GMO corn, is that it is in a high percentage of processed foods. So read the label; if it says corn sweetener, corn syrup or HCFS (high fructose corn syrup), chances are it’s GMO. Note also that non-sweet corn products like cornstarch and cornmeal are also highly likely to be GMO, as is light or dark corn syrup.

Regular corn syrup is pure glucose, and not nearly as sweet as table sugar (sucrose). It is also highly refined, and is most likely a GMO product (unless it is Organic).

High Fructose corn syrup (HFCS), is formed by converting part of the glucose in corn syrup to fructose, by the use of GMO enzymes. This results in L-fructose, which is not the natural form of fructose and is not bio-active. The body treats it like a toxin and carries it to the liver to be converted to triglycerides (fat), which then builds up in the liver, blood and fat cells. Overconsumption of L-fructose can lead to insulin resistance and fatty liver.

And now, because of all the bad press about HFCS, food producers are starting to use “crystalline fructose,” which basically is HFCS that has been even further concentrated to be at least 99% L-fructose.  It is believed to be even worse than HFCS and should be avoided (16).

Metabolism of these sugars

A comparison of the sugars in sucrose and HFCS metabolism can be made. Note that sucrose is broken down in our digestive system by the enzyme amylase, into its bio-active components: D-glucose and D-fructose; each of these components is metabolized differently. HFCS contains both sucrose and free L-fructose; it’s sucrose is broken down the same as other dietary sucrose, and the free L-fructose is sent to the liver to be detoxed and turned into fat (triglycerides).

D-glucose is readily absorbed into the bloodstream, where it is carried to all cells in the body. A rise in blood glucose stimulates the secretion of insulin, which in turn signals the cells to take up the glucose. Once inside the cells, glucose can be ‘burned’ (via the TCA cycle, aka Krebs or citric acid cycle) to create energy needed by the cell for its normal functioning. Excess glucose not taken up by the cells is carried to the liver where it can be converted to glycogen (animal starch) for temporary storage, or triglycerides (fats) for transport to fat cells and long-term storage.

Glucose is also critical in protein and lipid (fat) production and metabolism, and in most animals also for formation of vitamin-C.

Fructose is also readily absorbed into the bloodstream, but does not stimulate insulin secretion and cannot be used by most cells for energy. Instead, it must be metabolized in the liver:

This can explain, at least in part, how HFCS consumption can lead to obesity:

Dr. Mercola recommends no more than 25 grams of fructose per day. He offers a chart on his website, providing grams fructose for different fruits, starting from lowest to highest. (See Mercola’s site: Sugar Dangers (20) or Fructose and the Brain (20)).

See my 'About' page
View all posts by Cat →
This entry was posted in Sweetener and tagged agave nectar, corn syrups, molasses, sugar, sweeteners. Bookmark the permalink.