While this article is about lard (from hogs), the same method can be used for the suet/tallow from other animals as well.

I’ve never before rendered lard, but I’ve rendered goose and duck fat, so I imagine the process is similar. My friend Shelli and I decided to try rendering lard from local hogs (at Farm To Market Pork in Kalispell), using the crock pot method, as a photo-essay for my sustainability group, Essential Stuff Project. See that photo-essay at Rendering Lard in a Crockpot: The Process, and also related article: Rendering Lard: The Perfect (& Original) Shortening.

Lard has gotten a bad rap over the last 30 – 40 years, as all fats, and especially animal fats, have been demonized. But in earlier times, lard was a prized fat for baking pastries, pie crusts, frying and sauteeing, and deep-frying. Indeed, it was the original “shortening,” before the trans-fat laden Crisco and similar shortenings took over the market. Lard can be used in all the same ways that you would use butter, including as a spread on toast.

Today, commercial lard is hydrogenated to give it a long shelf life without refrigeration, but the hydrogenation process is a high-heat, high pressure process that kills the life in the fat, and potentially results in some trans fats, so should be avoided.

I do not recommend using lard from commercially-raised hogs (from the grocery store). Instead, insist on lard from hogs raised by a local farmer you trust, for a better fat profile.

General Instructions for Rendering Lard, etc. in a Crockpot

(Photos, this section by Cat and Shelli)

After collecting instructional websites (see below), I decided to try the crock pot method with my friend Shelli, as a photo-tutorial for our local sustainability group (Essential Stuff Project). We liked the crock pot method because it felt safer than stove-top rendering, and wouldn’t heat up the kitchen in summer like oven-rendering. See below for the highlights.

Collect all your equipment before starting: 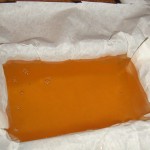 Reused lard is fairly damaged by oxidation, especially if it has been used for hot-temperature frying, so is not very healthful to consume. If the initial lard has not been used for frying, the clarified lard can be used again for frying but is not very good for baking (pie crusts, pastries, etc.). When I was a kid, we saved our used lard and bacon fat for a local woman who would clarify it, then use if to make soap for the washing machine.

In researching the crockpot method for rendering lard, I came across this great site that provides many good links on rendering lard and also for clarifying lard for reuse: Well Tell Me: Rendering Lard Info and Questions (4). The best of these are (the last two detail a method using a potato):

See my 'About' page
View all posts by Cat →
This entry was posted in Fat or oil, Pork, Rendered. Bookmark the permalink.