Roasted Rack of Lamb with Rosemary and Thyme Marinade, and Greek Variation 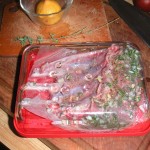 When you are trying to eat strictly pasture-raised meats, and especially when you eat out or are traveling (so don’t know the source of the meat), your best choices are lamb and bison, because these smart animals refuse to eat commercial grain feed.

My local grocery bought some lambs from a Canadian source again this fall, and had a selection of full and half-racks in the meat case this week. I bought one half-rack (4 ribs) to make for Sunday dinner. I don’t think I’ve ever made a rack of lamb before so I’m getting my inspiration from the internet.

I do like lamb with rosemary and thyme, so doing this as an overnight marinade appeals to me.  Or could modify for a Greek flavor, using oregano instead of the rosemary, and increase the garlic in the marinade.

Roasted Rack(s) of Lamb with Rosemary and Thyme Marinade

This recipe, adapted from Simply Recipes (1) serves 2 – 3 people, and can easily be halved to use a half rack. or you can roast multiple racks for a crowd.

For multiple racks, lay them out separately on the pan and cook based on roasting time for just one rack (not on the weight of the combined racks), and verify internal temperature with a thermometer.

The original recipe uses a plastic bag to hold the marinating meat, but I avoid using plastics especially in contact with foods, so I choose a pan with a lid that just holds the meat (not a lot of extra space). If desired, tuck parchment paper over and around the meat before covering with lid.

This recipe sears the meat in the oven, but you could heat 2 Tbsp oil in a cast iron skillet on top of the stove, add rack(s) one at a time, fat side down (bones on top) to sear 7 minutes, or until golden. Remove from heat and transfer rack to roasting pan, fat side up (bones down) to roast in preheated 400°F oven about 7 minutes. (see Food Network recipe (2) for more detail).

As above but use:

Testing 9/17-18/2011: Made half rack as directed, with lemon. However, meat did not reach desired temperature for rare after 5 minutes at 400° F (bone-side up), and 7 minutes at 300° F (fat-side up). I continued to cook another 15 minutes at 300° and then it reached 122° F (22 minutes total after reducing heat). I took it out of the oven to rest. This delay could be due to oven not reaching temperature (my thermometer is broken so I don’t know if thermostat is accurate). Result: Wonderful flavor- love the rosemary/thyme/garlic – but it could have cooked longer to reach 125° F. Next time, I’ll try searing the rack, fat side down, in a cast iron skillet before transferring to preheated oven at slightly higher temperature (325° F).

Testing 4/1/13: Marinated half rack, with lemon, but started too late so only marinated 2 hours. Seared stove-top. When roasting at 300°F, it never did get to 125°F on my thermometer, but I think that’s because the hole through the meat was bigger than the thermometer, after the first insertion. It was in oven 25 minutes at the lower temp and was medium-rare. Result: good flavor but was better previous time, from overnight marinating. medium rare is more done than I like, but it was still good.

Testing 8/28/16: Used chops that are bigger than previous two tests. Marinated half rack for 9 hours (7 in fridge). Into 400°F″ oven at 6:25 PM, fat-side up and bones wrapped in foil reduced oven to 300F roasting temp at 6:33 PM (8 minutes of sear). Roasted 8 min (6:41 PM) to check internal temp, hoping for 125°F but only 100°. Roasted other 5 minutes (6:46) and checked again; 125°F; total 13 minutes after reduced temperature or 21 minutes total (sear + roast). This was less than previous test, probably because I seared in oven which then had not cooled to 300 during the remaining time; in other words, it roasted at a higher temperature. Removed from oven at 6:48 and covered with foil to rest about 10 min while my veggies cooked (braised green beans and kale). Served at 7 PM with  steamed wild rice, beetroot, and the braised green beans and kale. Result: Meat is a little more raw than rare, but I ate it anyway. This un-doneness will help when I reheat the second serving. The seasoning did permeate the meat and it is truly delicious.