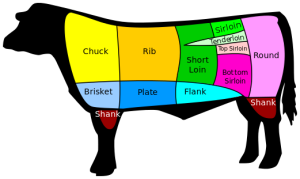 My Dad used to do a slow, dry-roast with sirloin tip that was absolutely delicious. Done properly, it can be medium-rare to medium and be quite tender. Because it is a dry roast, it doesn’t have the same texture as a pot roast, but rather more like a good steak.

So when I saw a nice cut of sirloin tip roast on sale, I decided to give the method a try. I found three recipes to use as a guide: Paleo-Leap Sirloin Tip Roast (1); All Recipes (2); and Wiki How: 4 Ways to Cook Sirloin Tip Roast (2).

The secret to a moist, tender roast using this method, is to sear it well to seal in its natural juices, and use a low-temperature (250°F) oven without added moisture.

Alternately, you can do a faster roast at a higher temperature.

Regarding the herbs: The original recipes use a combo of dried oregano and basil. However, I have a food sensitivity to this option, so I use oregano and thyme.

Prepare as above, with following changes:

1/11/15: Used 2.3 lb roast; forgot to salt it night before so it had only about 9 hours with the salt. Made rub as written except used 2 garlic cloves for the rub, and the other clove, sliced to stud the roast. Into oven at 6:30 PM. Used roast option 1; reached 134°F at 7:50 PM so removed from oven to rest (I’d intended to pull it at 130°F but I missed that). Result: Nicely dark on surface, and mostly tender except for the hard tendons that traverse the roast – even my best knife couldn’t cut through them. The flavor was great! The salt had started to penetrate the meat, which in turn helped the flavors of the rub penetrate. The red pepper flakes are a nice touch.

8/24/17: Used 1.8 lb roast; did not have the time to salt the night before so  added the salt to the herb mix. Set roast on counter to warm at 5:20 PM. As before, made rub as written except used 1/4 tsp garlic powder (2-clove equivalent); did not stud with garlic. Seared 4 min each side, then transferred to roasting pan and into oven at 6:30 pM. Used roast option 1. OOPS, preheated to 350°F by mistake so will use the standard (faster) roast option at 350°F.  7:10 PM: only 110 degrees;120 at 7:20; 140 at 7:30 PM; removed from oven and set to rest for 10 minutes on counter. Result: Roast was more like medium rare than rare, but delicious none-the-less. The herb rub is wonderful, but I forgot to add the red pepper flakes. Served with steamed potato, braised broccoli with garlic scape, cooked beet, and a greens/onion/cucumber/tomato salad with feta cheese.