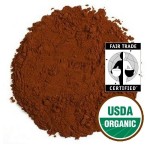 These two recipes were originally meant for cupcakes, but I bake them in my loaf pan, then cut into slices (like bread) to serve with raspberry sauce, or into brownies. Either way, they are rich and wonderful.

If you make them as cupcakes, you can frost them if desired.

This recipe is adapted form one in the local Daily Inter Lake newspaper, June 10, 2009 (2), but originally from the LA Times, by Noelle Carter (2).  The original recipe makes 20 cupcakes.  My adaptation is a half recipe. Since it doesn’t use much flour, I have not adapted this to a pre-soak.  It could be done, using the acidic coffee for the soak, if desired.

Ingredients and Equipment for My Half-Recipe Version

This recipe is adapted from Cooks Illustrated Magazine, April 2005 (2). It is nicely rich and not-too-sweet. I’ve not yet adapted this for presoaked flour – it’s just so good as it is, and uses less flour than other recipes.

The original recipe calls for ¾ cup sugar, but I make it with a combo of stevia and sugar, as written. You could try using ½ tsp stevia extract powder and no sugar, but the batter might need some sugar for the right texture.

See below for testing.

Ingredients & Equipment for My Half-Recipe Version:

3/31/10: I made this in a loaf pan, then sliced into 14 slices for serving with a raspberry sauce. Delicious. However, if you like this a bit sweeter, use 1/2 tsp stevia. Also, I had a few bumps in the making: first, I discovered my sour cream had started to go bad, so I had to go to the store to get more. Then I forgot to add the sour cream between the two additions of the flour mix, then baked it 5 minutes before I discovered my error. It had started to form a cake texture, but not too much, so I scooped the batter back into the bowl, re-buttered the bottom of the pan, whisked the sour cream into the batter, and poured back into the pan. Then baked it about 30 minutes. It turned out just fine, despite my forgetfulness.

5/24/13: Again made in loaf pan; this time everything was mixed in correct order. However, I only had 1/4 cup sour cream, so I added homemade yogurt to make the 1/2 cup total. Used 1/2 cup whole spelt and 1/4 cup unbleached white (wheat) flours; otherwise as written). Very fluffy batter. Baked 28 minutes; it fell a tiny bit in center while cooling, but not too bad.