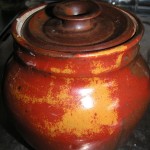 NOTE: I’m in the learning/testing stage with sourdough. Please be patient with me. So far my best success for bread is using the Tassajara Sponge Method for Sourdough.

My bread baking experience, taught to me by my Dad, has always involved commercial yeast. About 10 years ago I learned about the importance of soaking grains prior to mixing up the dough, and began an experiment with soaking my flour overnight, prior to adding the yeast. I had little success with this; primarily, the bread would rise on the counter but then fall in the oven.  The only success I had was with an overnight yeast ferment for focaccia and ciabatta.

In May, 2011, Essential Stuff Project, the sustainability group of which I am secretary, had an event on Sourdough: A Panel Presentation (8; this event summary also includes links to several files on sourdough, including recipes).  My friend Ronny H was one of the presenters; she gave me a wonderful sourdough crock as a gift (photo, above), and I took home some of her whole wheat starter. This began my love affair with sourdough.

Fermenting grain has many health benefits, but the primary one is that the ferment’s moisture and acidic environment make its nutrients more absorbable (much like sprouting and pre-soaking). But as far as is known, fermentation of the grain (such as sourdough) is the only method known to break down the highly toxic lectins in the grain (these are believed to play a major role in gluten intolerance, because part of the gluten complex is a lectin).

A long, slow rise provided by the fermented grain is more effective at breaking down the reactive part of the gluten complex (that the quick rise of commercial yeast), so that people with gluten sensitivity can safely eat the resulting product (per research in Italy regarding slow-rise and its effect on gluten (10,11,12).)

See Nourishing Connections for a Sourdough and Bread Presentation (includes recipes (9)). Excellent discussion on why to soak or ferment grains.

About a Sourdough Starter

The most basic of starters is simply flour and water. Some recipes call for added yeast, but it would just compete with the native yeast in the grain and surrounding environment, producing a weaker sourdough. Other recipes call for added sugar or potatoes, but this is not necessary and could weaken your starter.

What’s in the starter that makes it work?

Wild yeast (S. exiges) and lacto-bacteria living together in a symbiotic relationship (mutually beneficial) are what make it provide the taste, texture and rise. Note that commercial yeast is a different species (S. cerevisiae) than that in sourdough.

In addition to adding a different flavor to the bread, wild yeast works best in a slightly acidic medium maintained by the lacto-bacteria in the sourdough, providing the following benefits:

The following is from The Bread Bakers Forum (1):

“To understand more of what a sourdough is, we need to understand what yeast is. In simplest terms it is a plant. More specifically a fungus, a one-celled life form which digests sugars (such as those contained within the starch in flour) and produces a bit of ethanol (alcohol) and some carbon dioxide (which is what causes the bread to rise).

The natural yeasts in a sourdough starter are strains of a yeast family whose scientific name is Sacchraromyces exiges (S. exiges). They are cousins to the species in commercial bakers’ yeast: Sacchraromyces cerrivasae (S. cerrivasae). The two have what might be called a distant family relationship but differ in one important way: Commercial bakers yeast cannot survive in a very acidic environment whereas natural yeast is very happy to live in such an environment. This is important because the lactobacilli in a sourdough culture produce a lot of lactic and acetic acids (which are what gives sourdough bread its flavor). The acids create an environment too acidic for commercial bakers’ yeast, so only natural yeast can live with them.

In a healthy sourdough starter, yeast and lactobacilli thrive in a harmonious symbiotic relationship. This means that they do not compete for the same food and the yeast may actually help feed the lactobacilli. In turn, lactobacilli produce an acidic environment that the yeast like but which is inhospitable to other organisms. Thus the acids in the culture act as a sort of “antibiotic” so that lactobacilli contribute by providing a protective environment for the yeast.

Lactobacilli help bread rise, too. Just like yeast, they digest simple sugars found in flour and produce ethanol and carbon dioxide. In addition, the lactic and acetic acids that they produce flavor the bread with a rich complexity of flavors, sometimes giving it a sour tang.”

There are several different sourdough leavens with different characteristics, but all are natural leavens (contain no added yeast). In this list from The Bread Baker’s Forum (2), it is the French Levain that I want to perfect.

Most starters are made from wheat, probably because it is an abundant and relatively inexpensive grain. But many experts maintain that a rye starter is best, especially for making breads containing rye. I really like my spelt starter, though it has taken a lot of experimentation to understand how it behaves differently from wheat.

Here’s another great article (from nyx.net) on how and why you do what you do to make and keep a starter: How can I start a starter from scratch? (6) It is one of the FAQ (Frequently Asked Questions) pages from their site of Sourdough FAQs (7).

And see Nourishing Connections for a Sourdough and Bread Presentation (includes recipes (9)). Excellent discussion on why to soak or ferment grains.

Your own sourdough starter: overview

Starting with a starter

The best way to get started is to receive an active starter from a friend. You can also make your own starter over several days (see below). See also Natural Leavens for cousins of sourdough.

You do not need to order sourdough starter from San Francisco. Starters are unique to the community where they are used; one imported from far away will gradually change to one with yeasts and bacteria from your local area and no longer resemble the original starter.

Once you have a starter, you need to keep it fed, so that it will last indefinitely. Feeding involves adding equal amounts of flour and water to the starter and stirring just a bit to mix it in, but not enough to develop the gluten. If you use your starter regularly, always remember to retain some to keep it going. If you don’t use it regularly, you may need to remove some so it doesn’t die under its own weight (the removed or cast-off starter can be used for baked goods, or to augment your compost pile).

And of course, you need to use your starter. I use mine to make excellent bread, but you can also make just about any flour product using sourdough.

See my 'About' page
View all posts by Cat →
This entry was posted in Bread, Leavening, Sprouted and tagged sourdough. Bookmark the permalink.