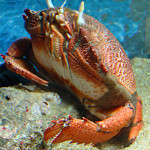 My favorite seafoods are mussels, crab and lobster. I also like many preparations of crayfish, but have never cooked them myself. Small shrimp and scallops (bay scallops) are problematic for me because of an allergy; larger varieties usually don’t cause problems, but I don’t eat them often.

Seafood stew such as bouillabaisse or cioppino is my favorite way to prepare crustaceans and shellfish. And I love just simply steaming mussels and baby clams in a flavorful broth.

Prepping shellfish and crustaceans for use in recipes can be daunting, but it is fairly easy, once you know how.

Crustaceans do not have an internal skeleton, but they do have cartilage and a hard outer shell (exoskeleton) which the moult so they can grow. Their body is in three parts: head, torso and tail; plus legs (which may have claws, and antennae. Like fish, they also have gills that filter the water they intake for the oxygen it contains.

One should always purchase live shellfish and crustaceans, because they tend to spoil rapidly and may not be safe to eat. Also make sure it is still alive, right before preparing to cook it.

If you need to store the live creatures, do so with care; do not leave them wrapped up in butcher paper or in a plastic bag/container, because this does not allow body fluids to drain.

To store safely: use a slotted drainage container over a tray to catch the water, and rinse them occasionally. Live clams & mussels still in the shell should be stored in the refrigerator in a dampened cotton bag or in a bowl covered with a wet cloth.

To cook: The most common – but not exactly humane – way to cook crustaceans is to place them, live and kicking, into a pot of boiling water.

For lobsters: Keep one hand on the tail, and use the other to position a heavy chef’s knife slightly above the middle of the lobster’s torso, with the blade facing towards the head. Use a single sharp movement to chop the lobster in half from mid-torso to head, killing it instantly, and then throw it into a pot of salt water for cooking. (8)

For crayfish: Before cooking, rinse them until draining water is clear; no need to purge them with salt (7). Cannot find instructions on how to kill them humanely, but because they are a close cousin to a lobster, a similar method might work. Or boil them alive only numbing them  in the freezer.

For crab: These creatures have a tail, but it is tucked under the body, making it difficult to kill it as you would a lobster. Instead, after freezing, you dull its two nerve centers so it doesn’t feel the boil. See a short YouTube video: Humane dungeness crab kill video (9).

For shrimp: See Fine Cooking (4) and Recipe Tips (11) for details on shelling and deveining shrimp prior to cooking them; however, this doesn’t seem to be very humane, unless you kill them first. Still looking for info on how to kill and cook them humanely.

Removing head, shell, legs and tail (optional). NOTE: shrimp purchased at a store or fish market usually have already had the head removed (11):

Getting the meat out 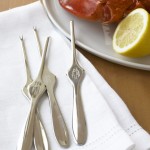 For this task you will need a lobster pick (lobster fork) or a small spoon, and a good knife. Photo, left, from Williams and Sonoma (5).

Edible meat is found in the claws, legs, body and main shell, and is removed after the crab is cooked. These instructions are from Great British Chefs (1); see also their YouTube video (1).

This crustacean is a freshwater lobster, but in general are much smaller than their saltwater cousin; they are typically served whole, leaving the task of removing the meat to the diner. These instructions in 5 steps are from The Kitchn blog (2), and are performed after the crayfish are cooked – typically boiled (See Cajun Crawfish (7) for a humorous description of a Cajun crawfish boil).

See Fine Cooking on Getting to the meat of a lobster (3), including meat in its claws, legs. See also  3-minute YouTube video (6):

Unlike the other types of crustaceans, the meat is exposed before cooking, by removing the   head, shell, legs and tail; see above.

See my 'About' page
View all posts by Cat →
This entry was posted in Boiled, Shellfish and tagged crab, crayfish, lobster, shrimp. Bookmark the permalink.