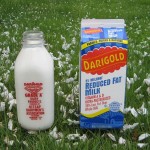 Back when I was a kid in the 1950s, a refrigerator without milk, butter, and cream was an empty refrigerator. Everyone drank milk. Every town had one or more local dairies, and dairymen delivered bottles of fresh milk to the door step each morning.  At school, each child got a half pint of local milk for free at lunchtime.

In my small town, the milk was raw until the mid ’50s when the small local dairies started to consolidate, and vat-pasteurize (1) the milk (the least destructive of the pasteurization methods). Soon the home deliveries stopped and local milk was only available at the grocery store. See my article originally published on The EssentiaList: Food Safety & Pasteurization (1) for more on pasteurization.

Today, many local dairies are gone, replaced by large, national, commercial dairies, and milk is shipped cross-country.  America’s dairies are struggling, because people just are not buying milk like they used to.  Why?

The Ad men would have us believe our dairies are struggling because they need better marketing.  But I think its because people are getting sick from milk. Many people suffer from lactose intolerance and other milk allergies. Other health issues with milk include:

Because of this sickness, people shun milk.  But is all milk to blame?  Prior to the 1930s, before pasteurization of milk became the norm, many people in our large cities did get sick, because the large, crowded dairies in big cities were co-located with the slaughtering facility and conditions were filthy. In rural areas, where dairies were clean, milk did not make people sick. In fact, the Mayo Clinic in Rochester, Minnesota used raw milk to heal people from conditions such as diabetes and tuberculosis!  Could it be that pasteurization is what is behind all the trouble with milk?  I think so.

Because of the level of sickness from raw milk in the large cities, dairies were given two options: submit to frequent cleanliness inspections, or pasteurize milk to kill the bad bugs in the filthy milk. In the large cities, dairies opted to pasteurize, but in rural areas where sickness from raw milk was quite rare, dairies agreed to the inspections. But as time passed, those small dairies began to consolidate and eventually were required to pasteurize their product.

Ultra-pasteurized milk came about in the 1960s when the large, consolidated dairies discovered they could warehouse ultra-pasteurized milk for longer periods, allowing them to ship cross-country. And that’s when people even in rural areas started having problems with the milk; not necessarily because it was filthy, but rather because the high heat/pressure of ultra-pasteurization process damages the milk’s proteins and other nutrients.

Another problem is the use of recombinant, genetically engineered hormones (rBGH) injected into dairy cows and consequently present in their milk. Because of this, people who still like milk are turning to organic milk to avoid the hormones.  But commercial organic milk is still ultra-pasteurized, and thus can still make you sick.

2015 update: Here in the Flathead, a local dairy decided to process their own milk, rather than shipping it to a processing facility more than 200 miles away. In 2010, Kalispell Kreamery (5) was born. Because of Montana law, they could not sell raw milk, so they did the next best thing: they do not homogenize their milk, and they use the HTST pasteurization (4) method that is much less destructive to the milk than ultra-pasteurization.

Local families are switching to this local milk and loving it. The dairy finds it hard to keep up with demand. And their customers are not getting sick (like they did on ultra-pasteurized milk).

Similar stories are happening around the country, proving that the large confinement dairies (whose cows are fed a grain diet, and whose milk is ultra-pasteurized) provide an inferior product that leads to illness.

So if you want good wholesome, health-giving milk, switch to local, raw, real milk from local farmers or dairies you trust. (Or, if you live in a state where raw milk is illegal like it is on Montana, find a local dairy that uses vat- or HTST-pasteurization method (1), and work with your state legislature to legalize the sale of inspected raw milk). Those who have discovered the wonderful taste of fresh, raw milk, and are feeling the benefits of its wholesome goodness, are spreading the word.  Raw milk consumption is on the rise in America, and that’s a good thing, as long as it comes from a clean, certified dairy.  Even better if it comes from a certified organic, biodynamic (2) dairy!

Get Involved!  Join the Campaign for Real Milk, and Help Legalize Raw Milk

Also, check out this Rebuild From Depression website (4) that compares levels of CLA in milk, butter and cream, for different levels of pasture (grass) feed, as just one reason to consume milk from pasture-fed cows.