14 Uses for Castor Oil at Home 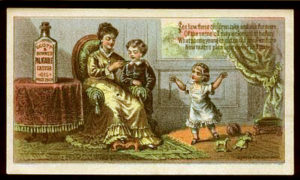 In the 19th century, castor oil was a common remedy in American homes (see old advertisement, right), but its use has fallen out of favor, perhaps in part because people have become aware of the notorious killer, ricin (which comes from castor seeds but is not present in the pressed oil). The FDA has categorized the oil as  “generally recognized as safe and effective” (GRASE) for over-the-counter use as a laxative (4).

It may be wise to keep a bottle of castor oil at home (1). Most uses of this oil are topical (on skin and hair), but it is also used internally to treat constipation. It is advisable to keep it out of reach of small children.

Uses for castor oil at home

What is castor oil? The natural oil pressed from the seeds of the castor plant (Ricinus communis). Although the seeds contain the highly toxic (killer) known as ‘ricin’ (4 – 8 seeds are lethal, and there is no known cure), the ricin is not present in the pressed oil because ricin is water, not oil, soluble.

When used topically (on skin/hair), it’s not necessary to blend castor oil with a carrier oil; just make sure to test the oil on a small part of your skin to check for any allergy or skin reaction. Also, be aware that it is fairly greasy, and may transfer to any garment you are wearing, or to your bed sheets; apply it lightly.

I divide the original 14 uses between Medicinal, Cosmetic, and Miscellaneous categories for ease in finding what you need; the original list is from Mercola (1) and Natural Living Ideas (2).

Safe and natural laxative. This is perhaps the most known and common use of castor oil. A 2010 study highlighted how castor oil packs helped to effectively reduce constipation among the elderly. (see video, below (5), for how to make a castor oil pack). Oral ingestion of castor oil can “purge” the digestive tract within two to five hours. Recommended safe dosage:

Muscle pain relief. Rub it on your muscles after an intense workout to promote blood circulation and relieve soreness. Mix it with peppermint oil or Roman chamomile oil (1) for extra healing and soothing effect.

Alleviate joint pain. The ricinoleic acid in castor oil has a decongestant effect on the lymphatic system, which is responsible for collecting waste from your tissues and carrying it to your bloodstream to be eliminated.

If the lymphatic system is not working properly (such as in people with arthritis), joint pain occurs. Massaging castor oil on the joints can help ease the congestion and jumpstart your lymphatic system. A 2009 study published in Phytotherapy Research (6) supports this, and reveals that castor oil helps relieve pain among patients with knee osteoarthritis. (1) [Cat’s note: I use this to relieve arthritis pain in my knees; I have a history of a sluggish lymphatic system.]

Helps treat fungal diseases. Castor oil may well be just as effective as anti-fungal drugs in treating common infections like ringworm, jock itch (tinea cruris) and athlete’s foot. In fact, it is an ingredient in the antifungal agent, Miconazole (4) with trade names Desenex, Monistat, and Zeasorb-AF.

Simply warm the oil, apply onto the affected area before bedtime and leave it on overnight. Repeat for a week or until the infection has disappeared completely.

Assisting a good night’s sleep.  Dabbing a small amount of castor oil on your eyelids can help you fall asleep much easier, and promote a deeper, longer sleep. Often your internal clock gets out of tune – this is common when there is adrenal fatigue; using castor oil on your hair and/or around the eyes is effective at resetting your internal clock.

Works great for colicky infants. Colic sometimes occurs during the first few months of a baby’s life and can lead to long periods of excessive crying. Its exact cause is still unknown, although gas is believed to be a major culprit. To use castor oil for colic, simply rub it gently all over your child’s abdomen.

Promotes healthy hair growth. Massaging warm castor oil on your scalp (and even your eyebrows) may stimulate the follicles and result in extra hair growth. Do this every night, and you might see improvement in as little as two weeks. Castor oil may work on areas that have been affected by alopecia as well. See Wellness Mama (3) for lots more about this use.

Gives your hair a richer color. Castor oil locks in the moisture in your hair, giving it a richer and thicker appearance. To get this effect, warm a tablespoon of the oil and use your fingertips to coat each strand, running your fingers through your locks to get it on as much hair as possible. [Cat’s note: I don’t know if this effect works on grey hair.]

Natural mascara. This homemade mascara contains no toxic chemical ingredients, unlike other conventional beauty products out there. You need:

Melt beeswax in double boiler, then add charcoal or cocoa powder and castor oil, mixing until you get the desired consistency.

Alternately, you can apply castor oil to your lashes every night to make them look fuller and thicker.

Skin moisturizer. The fatty acids in castor oil can nourish and moisturize dry skin. Due to its viscous nature, it stays put and easily penetrates into your skin tissue. Remember that a little goes a long way — simply rub a teaspoonful between your palms and apply all over your skin.

Banishes blemishes, skin growths and other skin problems. Because of its antimicrobial and anti-inflammatory properties, it may have some beneficial effects on skin tags, acne and warts. One study published in the Journal of International Toxicology also found that castor oil may have positive effects against occupational dermatitis. (7)

Safely treats your pets’ wounds. If you see minor cuts or wounds on your dog’s or cat’s skin, dab a bit of castor oil to help facilitate healing, due to its antimicrobial and anti-inflammatory effects. If your pet licks the wound (as most pets do), the oil is not harmful but could lead to loose stools.

Can be used as a food preservative. Whole dried grain groats (wheat, etc.) and pulse (pea, bean) seeds can be coated with castor oil to prevent them not only from spoiling, but also protect them from microbes, fungi, insects and other pests.

Don’t forget to soak these dry foodstuffs in water, then rinse before cooking or sprouting.

All-around lubricant. For squeaky hinges, scissors, meat grinders and other items around the home that need lubrication, castor oil works just great – almost as good as grease. Due to its consistent viscosity, it does not freeze, so it can be ideal for either hot or very cold temperatures.

See my 'About' page
View all posts by Cat →
This entry was posted in Fat or oil, Medicinal and tagged castor oil, remedy. Bookmark the permalink.