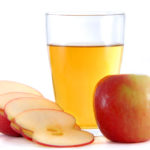 By Cat, Jan 2017 (photo, right, from Wikimedia Commons) NOTE: This posting is not yet completed; watch for updates!

Apple cider vinegar (ACV) has been in the news lately because of its lowering affect on blood sugar, especially when taken at bedtime. One tablespoon is the recommended daily dose for this application. I already take two ACV in capsules in morning and afternoon (4 capsules are equivalent to 1 tablespoon liquid ACV). For me, increasing the dose causes problems with acid reflux at night. So I will try taking the afternoon dose at bedtime instead.

This fall I discovered the benefit of gargling with ACV to relieve a sore or scratchy throat (see my posting  Sage & Thyme Gargle or Tea for Sore Throat). Or sipping on a combination of ACV with honey and ginger can also relieve a sore/scratchy throat (see my posting Apple Cider Vinegar & Ginger Drizzle/Tea for Sore Throat. So I wonder, what other health benefits does it provide?

NOTE: Rather than drinking ACV straight, dilute it in a few teaspoons (or a cup) of water to help mask its astringent flavor. Adding a bit of raw local honey also helps with the flavor. If you still cannot tolerate its taste, start with just ½ – 1 teaspoon in a cup of water, and slowly increase the vinegar over several days.

Add 2 Tbsp apple cider vinegar to 10-oz glass of water. Sweeten with stevia or raw local honey. (NOTE: some recommend balsamic vinegar  instead of apple cider vinegar, as its sweeter flavor is easier on the taste buds, but I’ve not seen any research about its use in this way).

This remedy is supported by research:

Balancing/healing our gut microbiome is in the news a lot these days, as medicine and science discover the importance of a healthy gut for our overall health and strong immune system. Mercola writes: “For everyday gut health, a mixture of 2 teaspoons of ACV with a teaspoon of raw honey in a cup of warm water will help (1).”

Another thing apple cider vinegar provides is detoxification of your lymphatic system, which then helps optimize homeostatic function in your body. This may be as a result of the antioxidants in ACV reducing oxidative damage by free radicals, while improving both your blood and organs. (1) The Truth About Cancer (10) says:

“Cider vinegar was recently determined to be a strong antimicrobial agent and alternative to toxic and expensive chemical disinfectants. One of the most fatal bacterium, Mycobacterium tuberculosis, is resistant to disinfectants but is found to be killed by acetic acid.(2a)

Especially in patients who are immunosuppressed, apple cider vinegar is an excellent natural antimicrobial tonic to rid of harmful bacteria and provide immune support.” (5)

In another study, malignant breast and colon tumors, as well as lung, bladder and prostate cancers, were all inhibited using rice vinegar; especially the cancerous colon tumors, which were inhibited by 62 percent. (2b)