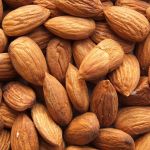 When I visited Scandinavian countries in 2006, I discovered that there are two very popular desserts, no matter where you go: Almond Cake/Torte, and Apple Torte:

This recipe is similar to the last pastry I described, with puff pastry on the bottom, the classic almond paste layer in the middle, and topped with apple slices.

This dessert is adapted from a package of Bob’s Red Mill Almond Meal/Flour (1), originally from Judy’s Kitchen (1). The original calls for frozen puff pastry that has been thawed. This is certainly easier than making your own, but if you really want to do this right….. See my recipe for puff pastry. The original also is a smaller recipe, for 2; in order to be able to measure the tiny amount of stevia powder, I doubled the recipe to serve at least 4. The larger recipe will also allow me to make a single 8 – 9 inch galette that can be cut into 8 wedges.

I prefer to sweeten primarily with stevia, but I include instructions for using all sugar, or stevia/sugar mix.

I’ve not made this yet, but when I do, I’ll make it in a tart pan with removable bottom (second Galette option in Method, below).