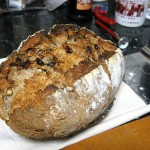 When I was living in Portland, one of my favorite lunch spots was Huber’s, a very elegant pub whose specialty was anything-turkey. They made their own bread there, a beer bread, using the beer that collected from pouring off foam from tap beer, and baking soda as leavening. The mix of beers gave wonderful flavor to their bread.

Bi-products of beer-making have long been used with sourdough breads; using beer in a yeast-risen bread gives a similar flavor and texture.

My recipe for their bread is locked in my Portland storage unit, but I recently re-discovered an old recipe from The Vegetarian Epicure Book Two, by Anna Thomas, that uses yeast as well as beer, and a sponge method. I’ve adapted that recipe, below.

This recipe is adapted from The Vegetarian Epicure Book Two, by Anna Thomas. This is a “hard-crusted, coarse-textured bread,” similar to old-world style breads currently popular from Artisan bakeries. Be sure to give it ample time to rise before baking.

It uses a sponge method which appeals to me because the sponge gives more opportunity for the moisture to work upon the whole grain (similar to presoaking or sprouting), to make the grain more digestible and nutritious. However, the original recipe uses white flour in the sponge, so the benefit is lost.

Makes 1 large loaf. Not yet tested.