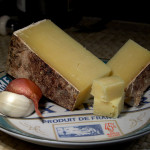 When I was a kid in elementary school, we were often served sticks of cheddar cheese from government surplus, but I didn’t like it. Mamma told me it was OK, children often cannot digest cheese, but they grow up to love it. So I waited….

Some friends from England owned a small deli in Portland, and one day they served cheddar soup for lunch. I decided to give it a try as I liked all their other lunch items. It was delicious, and thus began my love of cheddar soup. I soon discovered the beer-cheddar soup at Jake’s Restaurant in Portland, which became my standard for this type of soup, and a reference for my own recipe, below.

I had a great recipe for Beer-Cheddar Soup when I was still living in Portland, but now I cannot find it. However, I do have a good recipe for Cheese & Onion Soup (from Soup by Coralie Castle (1)), to which beer could be added, and also the recipe for Beer Cheddar Soup from Jake’s Restaurant in Portland (2). I have melded these into one (which is how I got my original recipe that is now lost).

I usually use Tillamook® Extra Sharp Cheddar; Kerry Gold Irish Cheddar is also very good. But any sharp cheddar can be used. I also use Tillamook® butter when I can’t find Organic butter, because Tillamook dairies mostly feed their cows in pasture, and they are not treated with hormones. Tillamook is a small town on the Oregon coast, and is known world-wide for their dairy. If you’re ever there, take their tour of the cheese factory.

Gouda is another cheese that is good in this type of soup. Or you could try a mix of cheddar and gouda. One of these times, I’ll try this recipe with English Stilton (but so far I’ve not been able to find it where I live in Bigfork MT).

Worcestershire is a commonly used seasoning in many recipes; Jake’s recipe does not use it, and I’m not fond of it so add it in drops, tasting after each, as a little goes a long way. Another seasoning often used in cheddar soup is dry mustard, which I use sometimes – its flavor is good with beer; I’ve added it as an optional ingredient. I love the addition of sage, but also include it as an optional ingredient.

Jake’s recipe calls for dark beer, but I prefer an amber ale – dark is just too rich and sweet for my taste. Stout would also be good.

Testing 1/1/11: I made a half recipe (serves 2 – 3) as written, including all herbs/spices; except I didn’t use the Worcestershire sauce. I used whole milk from our local Kalispell Kreamery (3); their milk is pasteurized, but not ultra-pasteurized, and the cream floats to the top. For the flour, I used 1 Tbsp unbleached white spelt and ½ Tbsp whole oat flour. The roux thickened well, and blended well with the added milk. I used between ⅓ and ½ cup ale. Result: Excellent! Very tasty and satisfying. 2015 note: I have learned that I have a food sensitivity to oat (similar to gluten intolerance), so I will just use unbleached white flour in the roux.

Testing 11/28/19 – for lunch on Thanksgiving: Made a half recipe (2-3 servings) as written, using all unbleached white flour in the roux and Worcestershire sauce at the end. Used 4 oz grated Tillamook sharp cheddar (1 cup, grated), and Pale Ale. Result: as before, excellent.

Testing 9/13/20: Made half recipe as before, using all the suggested herbs/spices in the unbleached white flour, and ¼ cup pale ale. However used only 3 oz sharp cheddar, which is all I had; it made little more than 1 cup when grated. Result: as before, excellent.