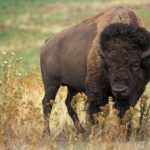 The following information is from a flyer on “Cooking Bison” at my local grocery store. Bison is a very healthful meat, and tasty too. It is not as fatty as beef. Generally, bison insist on pasture grass and will not eat corn/soy (GMO) feed. They may eat alfalfa which could be GMO, so buy from a rancher you trust.

Bison, or buffalo as they are often called here, are native to the North American continent. Europe and parts of Asia also have bison native to those lands, but like in America, there are not many of them left, and most have been cross-bred with cattle for domestication. Of all the red meats, pure-bred bison and yak is are favorites.

There is a movement afoot to conserve these precious animals, and many cattle ranchers are learning how to help our environment by raising their cattle to live much as wild bison once lived.

Their meat is very healthful, their coats are thick and warming, and they are good for our environment when allowed to roam freely as they did before Americans pushed west slaughtering and/or domesticating them. Here’s a chart comparing nutrient amounts for different dietary animals:

Generally, bison can be used instead of beef in recipes; however, cooking temperature/time may be different, as detailed below.

Note that steaks and roasts are available in the same cuts as for beef. However, there is more Protein and more iron per ounce in bison meat than in beef,

Roasts (Sirloin tip, inside round)

See my 'About' page
View all posts by Cat →
This entry was posted in Beef, Buffalo, Broiled, Grilled, Roasted, Seared, Slow-roasted, Stove top and tagged bison, buffalo. Bookmark the permalink.