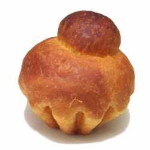 Brioche is another goodie I learned to make during my French Period (mid ’70s to mid ’80s). Back then, a friend gave me a copy of  The Art of Fine Baking by Paula Peck (1), which first introduced me to this wonderful sweet-rich pastry/bread. I bought a medium brioche tin (about 7″ diameter across the top) several small brioche tins (about 3″ diameter across the top). I mixed up roughly half the recipe, and used about half the dough in  the medium brioche tin (without a knob on top), and the remainder in the small tins, with the knob. So buttery! I just loved them. This is my Brioche Version I recipe.

Includes: 1. Brioche I; 2. Brioche II; 3. Brioche III See also: 1. Bread Basics (Yeast-Leavened Breads); 2. Bread & Rolls menu; 3. Salmon & Rice Loaf, in Brioche Not long after that, I bought a copy of Simca’s Cuisine, by Simone Beck (2). Simca is one of the authors of Mastering The Art of French Cooking, a cookbook I could not then afford, so I bought the less expensive paperback of Simca’s Cuisine as a starting point. Her book is designed in different menus, and one of them, for a buffet party, featured a baked salmon & rice loaf, wrapped in brioche pastry – a version of coulibiac (6). That recipe for brioche is my Version-II. (The Salmon & Rice Loaf, in Brioche became my most requested dish at parties. I shaped the loaf like a fish, wrapped it with the brioche, then decorated the pastry before baking, using the tip of a spoon to mark the scales and gills, a knife blade to draw the ridges on the tail and fins, and a slice of pimiento-stuffed green olive for an eye.) 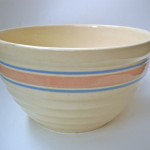 Back in those older times, I did not own a stand mixer; I used my Dad’s bread-mixing bowl (similar to photo, left, from Etsy (7)) and his wooden spoon to mix the dough. And I still prefer that method. It’s like the difference between driving a car with, or without power steering. You can feel the road (and I believe have better control of the car during bad weather) when you don’t have power steering. When mixing dough, you have a better feel for the hydration and texture of the dough if you mix with a wooden spoon, and even better feel if you mix directly with your hands. The other day, I received a recipe for mini-brioche on Fine Cooking.com (3) and related video (4), which I have not yet tried. It uses a stand mixer, and I’ve not yet adapted it to hand mixing. This is Version-III presented here. 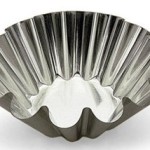 (Photo, right, from Amazon) This is adapted from the recipe in Paula Peck’s book, The Fine Art of Baking (1). This is the richest of the 3 recipes – using 12 egg yolks OR 6 yolks plus 3 whole eggs for 4 – 5 cups flour and 1 cup butter (OR 2 yolks and 2 whole eggs for 2 – 2 ½ cups flour and ½ cup butter, for direct comparison with the other two recipes). And it uses less sugar – about 2 Tbsp for 2 – 2 ½ cups flour. It is a large recipe, and for this reason, I have never tried it, preferring to use Simca’s recipe for ingredient amounts (and substituting ½ cup soft butter for the ½ cup oil), but following Paula’s mixing and shaping instructions.

For comparison purposes only, I’ve modified the ingredients by dividing in half. I do not recommend using this method of making a smaller recipe; instead, use the ingredients of one of the other recipes. I do recommend following the mixing and baking instructions of this recipe.

Ingredients (half of original, for recipe comparison only)

This is adapted from Simca’s Cuisine, by Simone Back (2). The original was developed from an experiment by Simca and Julia Child when making croissants. Because they used American flour (as opposed to European flour), they tried adding some oil; this gave a smoother pastry than when no oil was used. Simca then tried using peanut oil for brioche, and this recipe was ‘born.’ Most commercial peanut oil is already rancid in the bottle; choose instead cold-pressed peanut oil. Do not use ‘salad oil’, corn, soy, or canola oil, as these are likely GMO and rancid in the bottle. Cold-pressed safflower oil might work. Olive oil might work for a savory dish, but its flavor is too strong for sweet pastry. So I use soft butter (not margarine). The following makes 1 ½ pounds of dough.  This is enough to  completely enclose a 4-pound salmon.

2021 update: I’ve since learned about using sprouted grain flour, as the sprouting process partially-breaks down the gluten, so that even those with gluten sensitivity can use it. I would love to try this with sprouted wheat pastry flour or sprouted spelt flour that I pouches from Granite Mill Farms in Trout Creek Montana (8).

This Fine Cooking recipe, originally by Allison Ehri Kreitler (3), bakes the individual brioche in 16 small, 3” fluted brioche pans (à tête), as show in photo above right. See also a Fine Cooking video: how to make mini brioches à tete (4). But of course other pans or even a free-form can be used.  This version also uses a stand mixer with paddle and then dough attachment. I would prefer to hand-mix with my wooden spoon. I’ve not tested nor adapted this recipe other than to indicate my ingredient preferences. Makes 16 mini-brioches.

‘*NOTE: if using raw milk, scald it first, then cool to room temperature

See my 'About' page
View all posts by Cat →
This entry was posted in Baked, Dairy, Eggs, Fat or oil, Flour, Leavening, Sweetener and tagged butter, egg, flour, milk, yeast. Bookmark the permalink.