This is another recipe that dates back to my ‘French’ period – mid 70’s to mid ’80s. I wanted to learn to read French so I could understand a French menu; and I learned to cook many French entrees and desserts. Early on in that time, I bought a copy of Simca’s Cuisine, by Simone Beck (1). Simca is one of the authors of Mastering The Art of French Cooking. Her book is designed in menus for special occasions, and one of them, for a winter buffet party, featured this Pâté de Saumon en Brioche recipe, which quickly became my most requested dish at parties.

The dish is an adaptation of a Russian dish called coulibiac, a type of pie made with salmon or pike and hard-boiled eggs, in brioche or other rich pastry. 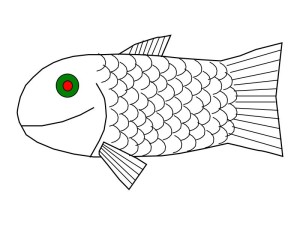 I shaped the loaf like a fish, wrapped it with the brioche, then decorated the pastry before baking, using the tip of a spoon to mark the scales and gills, a knife’s dull edge to draw the ridges on the tail and fins, and a slice of pimiento-stuffed green olive for an eye.

I wish I’d taken a photo of it, to display here, but alas, that will have to wait until I make it again. I don’t have those big parties anymore, because my Montana house is quite small, but perhaps one of these days, I’ll just make it for two. In the meantime, my sketch, above, will have to do.

I’ve adapted this recipe – with few changes – from Simca’s recipe (Simca’s Cuisine, by Simone Beck (1)). Serves 8 as a main course for a sit-down dinner, or serves many at a party.

This sounds like a fairly tedious recipe, but it is so worth the effort.

I buy only fresh, wild salmon (or one that is frozen right after being caught, for use in the off-season), and Organic white rice (not the quick-cooking kind like Uncle Ben’s). Brown rice doesn’t work well in this dish, and these days, it is contaminated with arsenic – even Organic brown rice (from being grown in the same soil where cotton was once grown, and the extensive fertilization required by cotton, typically chemical fertilizers, polluted the soil).

Saffron is an expensive spice but you only need a pinch, so do indulge.

Make the brioche dough a day in advance, then refrigerate it. The salmon and rice loaf should be made the day it is to be served, but can be prepared 1 – 2 hours in advance, and kept warm, wrapped in foil, in the turned off oven.

* Almond meal is also known as almond flour, though the flour is usually ground more finely. Bob’s Red Mill is a popular brand.

Gills: About 4″ from the nose tip, cut a slight curve, starting midway between top and bottom of head, almost to bottom of head. Separate the pastry a bit along this curve, and insert one of the parchment cylinders at the top of the curve to keep the vent open.

Mouth: Using dull edge of knife blade, draw a mouth (but without cutting through the pastry), with a slight smile, as a line from tip of nose to about ¾” from the gill.

Tail: Squeeze the fish a bit at the indentation between body and tail so that it is more noticeable. Puncture the other vent hole in the body of the fish about 1″ before that indentation, and insert the other parchment cylinder in the hole. With the dull edge of the knife blade, draw fin lines in the tail, from the indent to the tip of the tail, so that the lines fan outward toward the tip of the tail, but avoid cutting all the way through the pastry.

Scales: Using the curved edge of a rounded spoon, mark scales on the body of the fish in rows from top of the back to the belly, pushing the tip into the pastry to create a U-shape for each scale. The scales should alternate, like bricks.

Fins:  These are optional; they tend to break off when you transfer the fish-shaped paté to the serving platter.

Eyes: Cut a pimiento-stuffed green olive in half; position one of the halves on the head where the eye will be and press it into the pastry. Eat the other half, or slice more of the olives in half and use them to garnish the platter.