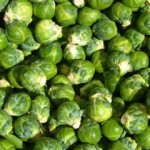 I love brussels sprouts, but this has not always been so. When I was a child, I got a stomach flu and puked all over my bed; what came out was sauerkraut that I’d eaten earlier. After that, I would not eat any kind of cabbage because I was reminded of that horrible experience. In my early 20s, I was able to eat raw cabbage (as in cole slaw), and soon after I tried brussels sprouts when I was invited to dinner at a friend’s house. Oh my! What pleasure I’d been missing!

I usually braise them in my cast iron pan, or slow cook them with a pot roast, but I’m always interested in trying other options.

The following is from a Mercola post, augmented with my own experience.

Use lukewarm water (better at removing dirt and chemicals than cold water); if not grown organically, add some baking soda which, according to one study, can remove 96% of toxic pesticides on most produce (such as the fungicide thiabendazole and the insecticide phosmet) help remove pesticides.

There are two washing options as listed below. I usually use the second option,  which is better at dislodging dirt and chemicals throughout the veggie. But when I don’t have time to let them dry thoroughly, I use the first option.

First, trim a bit of the tough stem off, to make them more tender, but don’t remove too much – no more than ⅛”, or the leaves will fall apart while cooking. Using a ceramic knife is best, according to Mercola, but I don’t have one so use a stainless steel paring knife. Afterward, remove any brown or yellow leaves, as they’re already wilted.

If they are less than 1½” in diameter, you can leave them whole but cut an X-shape into the top of the sprouts. This helps them to cook more thoroughly and evenly.

If more than 1½” in diameter, you may want to cut them in half or quarters, so that all that will be cooked together are about the same size (3)

Cooking in a pan on stove-top

I don’t recommend boiling vegetables, as so many of their nutrients are lost to the cooking water. Instead, I steam (see below) or braise them (see above). But here’s the boiling method, should you choose to use it.

Steaming makes them tender but not overcooked, waterlogged or soggy. This is a preferred way if you don’t want to use oil or butter. However, I must note that cooking them in oil/butter makes their valuable minerals more bio-available.

I use a steaming basket when I want to steam them, or place them directly in a pan with water.

Mercola adds: “a great ingredient that will add a depth of flavor to oven-roasted Brussels sprouts is balsamic vinegar.” See also my version (below) of his Balsamic Drizzled Brussels Sprouts recipe (1b), which is a variation of oven-roasting.

This version of the above recipe is from a different Mercola article (1b). The photo on that page is mouthwatering.

Testing the Balsamic-Brussels sprouts recipe, 2/25/18: I made this recipe to accompany a grilled steak with  mushroom, gorgonzola and mushroom sauce. The Brussels sprouts were delicious and a good accompaniment for the steak. However, because they were small, I didn’t cut them in half; next time, I’ll cut them in half, and add just a tad of water to the pan, as they got a little too dry. I’ve updated the recipe accordingly.