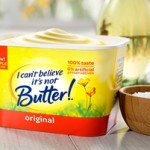 When Is a Fat Not a Fat?

The answer: when it is made of any of the following:

Why should you care?  Because it affects food labeling, and allows food manufacturers to mislead the consumer. They can use trans fatty acids in the food and yet declare their food as trans-fat-free (4); they can lead the consumer to believe the product is all-natural, when in fact you would never find the fat in a natural plant or animal.

But they are not simply mixed; rather, the fatty acids of each fat are removed from the triglyceride before mixing, then induced to re-form triglycerides. The problem with this is that while unsaturated fatty acids in a natural triglyceride will never be in the middle position because of the kink in the fatty acid, the chemical process called ‘interesterification’ allows unsaturated fatty acids to be in the middle position, creating an unnatural fat. This in turn causes problems for the body’s enzymes and signaling mechanisms that can lead to serious health issues (11).

A short history of chemically-altered fats

Several aspects of this history of trans and interesterified fats disturb me:

Because it is now well known that trans fats are bad for us, manufacturers are replacing these known toxins with other chemically altered vegetable fats, in the hope that we will continue to prefer these industrial products to natural, whole counterparts (butter, lard,  and coconut oil).

A 2007 study in Nutrition and Metabolism (7) compared the impact of three types of vegetable fats on human fat and sugar metabolism.  These three types of fats are all currently available on our grocers shelves:

The results of this study reflect undesirable changes in fat and sugar metabolism when subjects consumed the chemcially-altered fats (trans and TFF), compared with when they consumed the natural saturated fat (7):

The researchers attribute the problems seen with TFF fats to the interesterification (IE) process, which allows fatty acids to combine randomly to the three positions on the glycerol backbone to make a triglyceride.  When a fatty acid is in a position the body’s enzymes cannot recognize, the substance is toxic, altering metabolic processes in ways harmful to health.

This is, in fact, what was found to be the problem. The process of interesterification is random (not controlled by enzymes) so that the individual fatty acids are free to attach to the glycerol backbone in any of its three positions. But in natural fats, an unsaturated fatty acid will never be found in the middle position, because of the kink in the unsaturated (cis) fatty acids. The body treats as toxic any interesterified fat molecule with a cis fatty acid in the middle position; this toxicity is known to affect sugar metabolism in a harmful way.

For more detail about this study, refer to my article Trans Fats: No longer Recognized as Safe. See also Mercola’s website for more on interesterified fats (11).

If our 100-year deadly experiment with trans and other unnatural fats has proven anything, it is that in biological systems, geometry is everything; just as the pieces of jig-saw puzzles will only connect in specific places, so it is with biochemical molecules.

See my 'About' page
View all posts by Cat →
This entry was posted in Dairy, Diet, Fat or oil, Health and tagged fat, hydrogenation, interesterification, oil, trans fats. Bookmark the permalink.