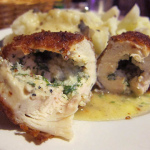 Chicken Kiev (as served at a Ukrainian East Village Restaurant)

I first encountered Chicken Kiev at a small French restaurant in the basement of a Portland brick apartment building. While the dish likely has Ukrainian or Russian origins, the French have certainly embraced it. I introduced my Mom to this dish at that same restaurant, and she then encouraged the new 1980s dining spot in Bigfork – The Bigfork Inn – to include it on their menu, where it can still be found today.

It is a chicken breast stuffed with a brick of butter, garlic and herbs, then baked so that the stuffing melts and seeps out, thus also flavoring the entire breast. Simply divine!

This recipe serves is adapted from Viking River Cruises (1). The original serves 6; I’ve cut it down to serve 3. It is hard to find a 5-oz chicken breast halves these days – they are usually twice that size; so if needed cut a half-breast in half again.

The original recommends using panko for breading the chicken, but you could certainly use your own breadcrumbs, made from dried bread.

2/17-18/2013: I made as written, starting with 2 boneless, skinless chicken breast halves. I brined for 30 minutes but forgot to set the timer so it was probably more like 50 minutes. Each weighed about 10-11 oz, so I cut them in half, lengthwise, so there would be less thickness to pound out, then set one piece aside for another use. I forgot to add garlic to the butter, so I sprinkled it over the disc when I placed it on the breast. Also didn’t add lemon juice because it would not have mixed well with the butter – I drizzled it over the disc after placing on the meat. I used dried herbs and in retrospect I think I should have soaked the herbs in the lemon juice. I rolled the brick into a sausage, but it was very difficult to divide after freezing, so in future, I will make separate butter patties for each breast. Did not need as much flour, egg and panko as directed so I have updated amounts in the recipe. The stuffed breasts held together fairly well during the browning process, and they browned nicely. Had to bake about 45 minutes to reach 180°F. Result: Very tender and tasty, but I don’t think I had enough salt in the brine, as they needed salt. I served with lightly braised spinach, baked squash and beets.