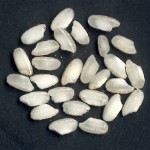 Nothing beats a good soft, creamy pudding as comfort food.  Rice pudding is thickened by the starch in the rice, so that cornstarch is not required.  The rice also sweetens the pudding, so that much less sugar (or stevia) is required.

Rice pudding has a long tradition in Scandinavia, and is part of Christmas tradition in many Scandinavian homes, including mine. When the pudding is served, one of the servings contains a hidden almond.  The person receiving this special serving will be blessed for the coming year.

But you don’t have to wait until Christmas to serve this wonderful dessert.  It has a very satisfying taste and texture any time of the year.

Compared with other grains, rice contains no gluten, and is relatively low in phytic acid, so does not require overnight soaking. Brown rice is highest of all grains in B Vitamins, and also contains iron, vitamin E and some protein.  Short-grain rice (white or brown) is preferred for puddings, because it is starchier than long grain rice.

Traditionally, these puddings are made with whole milk, or milk and cream.  However, you can use diluted coconut milk (not lite coconut milk) for all or part of the milk/cream mixture.  I would not substitute soy milk in place of whole milk, but homemade almond milk might work (commercial almond milk has many undesirable additives).

Some recipes use water and milk to cook the rice, but I prefer raw milk and cream for their higher fat content, which is a good balance for the sugary grains (to curb insulin spikes).  Also for the calcium and other minerals in milk.

This recipe is adapted from Wonderful Wonderful Danish Cooking, by Ingeborg Dahl Jensen (1), and serves 6 – 8.

The original recipe calls for 1 1/2 Tbsp sugar (a similar Swedish recipe uses no sugar at all!).  I prefer to use maple syrup which is sweeter than sugar, so less is required.  With such a small amount of sweetener needed, substitution with stevia is not necessary.

In modern times, this is made with short-grain white rice, but I prefer to use brown rice for the higher nutritional value. White rice does, however, provide a creamier end result. The choice is yours. 2015 update: In the last few years we’ve learned that brown rice has a higher arsenic content that most white rice – even Organic brown rice, because the soil is polluted with arsenic from past fertilization and contamination. This means that using white rice is probably your best option until the arsenic problem is resolved.