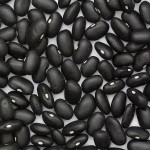 I first had this soup at a small cafe near the office building where I worked in Portland OR. Up until then, I’d not been much of a fan of dried beans (except as a kid I liked Van Camp’s Pork & Beans, but that’s another story). But upon first taste, my eyes lit up and my heart glowed.

This recipe is adapted from ‘Cuban Black Bean Soup’ in Soup, by Coralie Castle (1). The original serves 8 – 10, but I’ve modified the recipe to serve 4 – 5, and revised it to include some ideas from ‘Black Bean Soup’ in The New Vegetarian Epicure, by Anna Thomas (2).

The original recipe calls for Maggi’s seasoning (an Asian seasoning sauce), but I couldn’t find that in Portland, nor where I now live in Montana, so I winged it, not really knowing what it should taste like. I used tamari sauce and added a bit of chili seasoning. But as I’m writing this on my new website, I decided to check for substitutes on Cook’s Thesaurus (6): “equal parts dark soy sauce and Worcestershire sauce (From a usenet posting by Colonel I.F.K. Philpott…) OR Thai sweet soy sauce OR mushroom soy sauce.”

As a main meal:

As a side dish, or to garnish the soup part of the main meal: