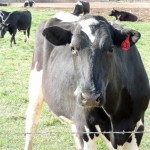 Dairy Cows in the Flathead

I just bought a beef rump roast (bottom round), and wanted to try something new, maybe something true to my Scandinavian heritage. I found a couple promising recipes in Wonderful Wonderful Danish Cooking by Ingaborg Dahl Jensen (1) for more information about this book); both are for pot roast that requires a long-slow braise, and one finishes the roast with a sour cream sauce.

That gave me the idea to use my crock pot that is still in a moving box from my old home in Portland. So I unpacked and dusted it off, then consulted Crockery Cookery by Mable Hoffman (2) for hints on how long to cook it in my crock pot, as opposed to a slow oven. And there I found the recipe that I used as a basis for this recipe. It is similar to the two recipes in the Danish Cooking book, but with the addition of dill which flavors both the meat and the sour cream sauce.

This recipe is adapted from Crockery Cookery by Mable Hoffman (2) and Wonderful Wonderful Danish Cooking by Ingaborg Dahl Jensen (1). The instructions are for using a crock pot, but you could use a covered casserole in a slow oven, or in a large covered pot on stove-top. Serves 6 – 8.

See testing below; I’ve modified and added ingredients and steps as indicated in red, per testing.

This recipe is an adaptation of the above recipe. The instructions are for using a crock pot, but you could use a covered casserole in a slow oven, or in a large covered pot on stove-top. For my test recipe, I did a slow-roast in the oven. See 12/27-28/16 testing below.

As for Dill version above with the following changes:

Prep meat, onion and potatoes as above; slow-cook as above. For my testing I cooked in oven at 275°F for the first 2 hours, then rested overnight in fridge because it was getting too late. Next day I let it warm to room temp, then cooked in oven at 300°F until fork tender; total cooking time, 5 hours. However, if cooked continuously at 275°F rather than two separate nights, it would have taken a bit longer. Prepared sauce from pan liquids, thickening with tapioca starch.

9/21/14, crock-pot: Testing with bottom round roast. Made as written, did not adjust for smaller cut (2 ¼ lb instead of 3 – 3 ½ lb), except used half an onion and 1 baking potato. Used water rather than diluted stock, and vinegar instead of wine. Started in crock pot on LOW, at 9:45 AM. It should be done between 5 and 7 PM. at 6:30 PM I noted that the bottom of the roast was fork tender, but the top had a way to go, so I turned it over. Removed roast from pan at 7:30 PM (total cooking time, 9 hours, 45 min). Made sauce as indicated, using 2 ½ Tbsp tapioca starch; it wasn’t quite thick enough so added another scant Tbsp (total tapioca starch 3 rounded Tbsp in 3 Tbsp water). Result: Meat was not salty enough on its own, and was a bit dry. The sauce provided the salt and brought out the beef flavor. Next time, I will sear the roast before placing in cooker, as that will help the meat to retain moisture; and I will use more salt to rub on the meat and then less in the sauce. Recipe updated (in red) accordingly. Served with braised broccolini and asparagus, cooked beet, the potatoes cooked with the beef, and a salad of mixed greens with slices of pear (from my tree), dried cherries, chopped pecans, feta and Balsamic & Basil Vinaigrette.

7/24/16, crock-pot: Used 2.5 lb eye of round roast; rubbed salt/dill mix, then let rest in fridge overnight. In AM, seared in lard then placed in crock pot with onion and yukon-gold potato; added veggie broth and red wine. Set to cook at 10 AM on low setting.  Tested at 5 PM (after 6-hours); potatoes are done but meat is not yet fork tender on top but is on bottom so turned roast over to continue to cook. Increased to high at 5:30; 5:45, almost there. Removed roast from pot at 6 PM; mixed 3 Tbsp tapioca starch and 3 Tbsp water, then whisked that mix plus dill weed into the broth liquid. Nicely thick; let simmer while I braised some kale. Served with beet, potato and kale. Result: Roast is fork tender and nicely flavorful with the sauce. I love how the onions are so tender. It’s even better after reheating a serving in my double boiler.

12/27-28/16, oven-roast: This time I decided to slow-roast in oven, and use a different seasoning – the herb rub I use for my Christmas Day Roast Rack of Reindeer (Venison), Prime Rib, or Lamb: a mixture of peppercorns, juniper berries and dried rosemary ground fairly fine in a spice grinder. I rubbed this, with Real salt all over the 2 ½ lb beef rump roast. Otherwise made as written, searing in cast iron skillet on stovetop, using raw apple cider vinegar in the broth rather than red wine, and roasted in my Corningware covered casserole pan (as in photo, right (3)) in preheated 250°F oven. It went into oven on 12/27 at 8 PM; removed at 10:30 PM and into fridge for overnight. 12/28: Warmed to room temp at 4 PM; into re-heated 300°F oven at 5:15 PM to resume the slow-roast; potatoes are done, but have to melt the fat before could be removed. Removed at 8:15 PM, when tested fork tender; total 5 hours cooking time between the two nights. Drained liquids into small skillet, thickened with tapioca starch in a bit of water. Did not add cream/sour cream as for dill recipe, just served sauce as is. Result: Delicious! Meat and sauce are a bit salty; I could have used less salt in rub mix. However, I rather like it salty. This is so good, I added it a separate recipe to this posting

2/28/17, oven-roast: 2.5 lb cross-rib roast, rubbed with rosemary-juniper berry rub; seared in coconut oil, placed in casserole and topped with sliced onion; added 1/4 cup each red wine and water to skillet to deglaze, then poured over roast. Covered casserole and placed in 250°F oven at 1 PM. Increased to 275 around 5:30; out of oven at 6:30 PM – very tender and sauce was wonderful. However, I forgot to add salt to the rub so have to salt meat at table. Total cooking time: 5 ½ hours.