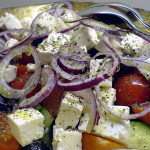 This salad uses the Greek Village Salad to make a sandwich in Pita bread. The tapenade is a nice touch.

If you want more protein in the sandwich, add falafel, or grill some brined chicken breasts, then cut into ½” cubes. Toss with the salad, but use a bit less cucumber and tomatoes in the salad.

Another protein option is to cook some sprouted quinoa, then chill it before tossing with the salad.