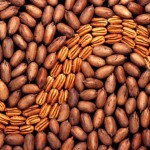 Pecans (Shelled and in the Shell)

Includes: 1. Maple Pecan or Walnut Pie (my adaptation of the following); 2. Quick comparison of the three recipes from which my recipe is adapted

The first nut pie I had was Washington Nut, at the Lake Cafe here in Bigfork, when I was a child. The Lake Cafe was next door to Dad’s bar, and I got many of my meals there. The head cook, Bunnie, did the baking, including all my favorites:  Washington nut pie, banana cream pie, caramel nut rolls, and carrot cookies.

Most older recipes for nut pies used corn or Karo syrup, but by the mid ’90s, corn syrup was made from GMO corn, contaminating it with toxic herbicides and pesticides with long-term harm to anyone who consumed it. We are now seeing the result of that contamination, expressing itself  in obesity, heart disease, digestive problems, and dementia. For this reason, I prefer recipes that include maple syrup instead of corn syrup.

I’ve never made a nut pie, but would like to some day, so I’m keeping the pertinent recipes here for that ‘some day.’

(Photos, below, from Wikimedia Commons: Pecans and Walnuts, respectively) 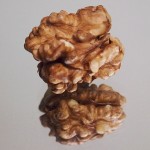 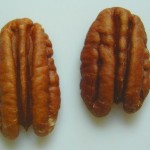 I’ve not yet tested this recipe, which  is adapted from three sources, for 9″ pie (see below this recipe for comparison of the three original recipes and their methods):

I found a fair amount of variation in the list of ingredients and in the amounts, between these three recipes. As a starting point, I mostly choose the middle route. See text box below this recipe for quick comparison of ingredients.

All recipes indicate either pecans or walnuts could be used; I prefer pecans but walnuts are often easier to find in any season. All three specify toasting the coarsely chopped nuts.

I prefer to presoak my nuts overnight, to improve the availability of the nutrients, then toast them. Chop them before soaking to maximize the effect of the soak; then dry them before toasting.

The amount of sweetener is a bit of a challenge because of the variety expressed:

The white vs brown is resolved by my preference for dehydrated sugar cane juice (such as Rapadura), which retains the original ratio of white sugar and molasses in sugar cane. Rapadura can’t be ‘packed’ so ½ cup of packed brown sugar would be sweeter than ½ cup of Rapadura. Since I prefer less sweetness, this is not a problem for me. If you want it sweeter, increase the amount.

I love the flavor of both molasses and maple syrup, so express the amounts of Rapadura sugar and maple syrup as ranges – the less sugar used, the more maple syrup; my ranges are as follows, with my preference in bold-blue text (because both nuts and maple syrup come from trees, I feel a synergy with emphasizing that combination):

Choose Grade-B maple syrup for it’s rich flavor (it’s also less expensive than Grade-A Pancake syrup). Do not use maple-flavored pancake syrup – it is made from GMO corn converted to HFCS, and poses potential serious health concerns. For similar reason, I do not recommend using corn or Karo syrup. Neither tastes as good a real maple syrup, nor do they behave the same in recipes.

I would also prefer to reduce the sugar by using part stevia, but do not know if that would work since sugar plays an important role in the texture of the pie – testing will resolve that question. Refer to Stevia (about) for tips on working with this sweetener.

The BHG recipe uses nutmeg, but I think it would fight with the maple syrup for flavor; the Pillsbury recipe thickens the pie with flour, but I don’t think that is needed; if testing reveals a thickener would help, I would use tapioca starch.

Both the Cook’s and Pillsbury recipes use salt while the BHG recipe does not. I choose to try a bit of unrefined sea salt, for the minerals and balancing effect it provides.

The three recipes also differ somewhat in method; I’ve followed the method for the Cook’s recipe because of the use of a bain marie/double boiler to cook the filling; but may need to make revisions after testing.

One dilemma has to do with whether or not to pre bake-the crust. Cook’s recipe is the only one that uses a pre-baked crust; since they are known for their extensive testing of recipes, I’d start with their recommendation. All three recipes use a standard American Pie Crust (rolled), and while I would prefer a short or crumb crust such as Pastry Brisée (pressed into pan), I will start with the standard crust, pre baked, until I get the filling perfected. And this is one case where I would use wheat flour rather than spelt.

Serves 8 or more – I recommend cutting the 9″ pie into 10 servings, as this pie is very rich.

The instructions here are for a rolled pie crust. If you choose to use Pastry Brisée or another short-crust which is pressed into the pan rather than rolled, see my pre-bake instructions at Pie Crust Challenges & Notes, under “Assemble the Pie.”

Quick Comparison of the 3 Recipes for 9″ pies

(see below the ingredients summary for each recipe’s method). 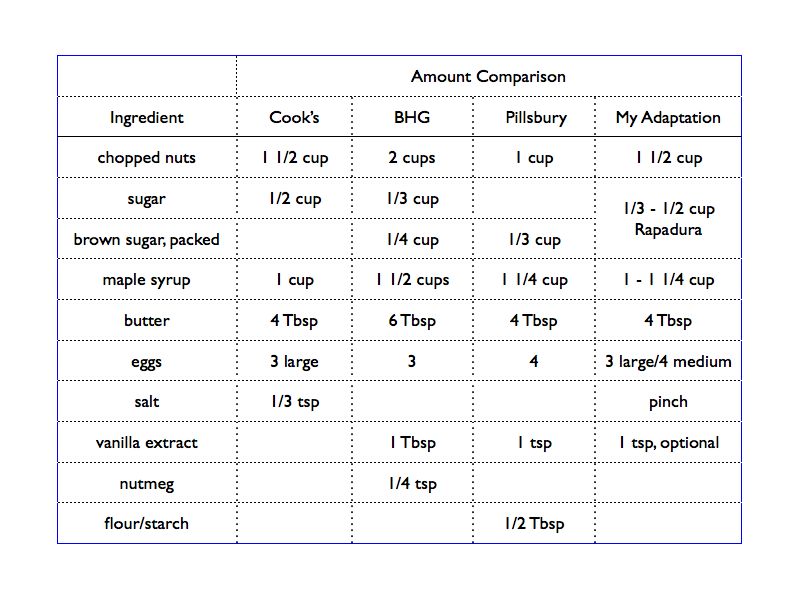