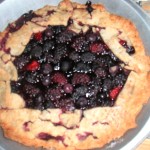 Tarts are the ancestor of American pies.  French tarte are very sophisticated (see Tarte aux Poires for an example); Italian Crostata and French Galettes are rather rustic and homespun. (Crostata/Galette are basically the same, just a different name in different language).  But from one extreme to the other, and also in-between, they are simply delicious.

The rustic tarts are formed by rolling out the pastry, arranging the mixture of fruit, starch and sweetener on top, leaving about 2″ exposed pastry all around, then carefully folding that exposed pastry over the filling, and then baking. Small, single-serving tarts make wonderful treats for packing in a lunch bag; larger, multiple-serving tarts are a great presentation at a picnic or informal buffet party.

The rustic tarts do not require a pie pan for baking, though I find that forming and baking  the tart in the pan with its slanted sides is easier than forming it on a flat baking sheet, and helps keep the tart’s juices from spreading out and burning.

After testing, I find that my favorite pastry for rustic tarts tea the rich short crusts (Pasta Frolla (Italian), Pastry Sucrée (French) and Galette Rustic Tart Pastry (French); all of these use egg instead of, or in addition to, water to hold the pastry together. The Crostata Rustic Tart Pastry (Italian) is basically a standard American Pie Crust with sugar added, and just doesn’t work as well as the more authentic European pastries.

My first testing (see below) used the Crostata Pastry; I was not happy with that result and switched to using Pasta Frolla recipe (1 ½ version as indicated).

Testing 6/4/09:  Didn’t have enough berries, so added 1 cup rhubarb pieces; increased stevia to 1/2 tsp, and added 2 tsp honey.  Used Crostata pastry, dividing dough to make two pies, since I don’t have a large enough baking sheet for a 12 – 13″ pie.  But I made them too big, about 10″ finished, which meant the crust was rolled too thin, and they rather fell apart when I folded the crust up and over the edge of the pie.  Still, wonderful flavor (the rhubarb is a nice addition), and the crust is nice and flakey, with good taste and texture.  Next time, I’ll aim for a 6 – 7″ finished size (roll crust to about 10″), to make two tarts.

7/1/09: Made as before, but rolled to smaller, 10″ circles.  Crust very hard to roll after chilling; it tends to tear and leave holes.  Either needs more butter or water, or should not chill it.  The flour:butter proportion here is same as for my spelt pie crust recipe, but the amount of water is almost half.  Next time I’ll use more water or butter, and just let it rest in a cool place before rolling.  Used 2 bags frozen mixed berries, which was too much for the smaller pies.  One bag would not be enough.

7/9/09: As before with following changes:  added extra Tbsp butter to cut into flour mixture; used 4 Tbsp cold water mixed with 1 Tbsp vanilla; sprinkled over flour/butter mixture, then worked into dough with pastry cutter and then fingers.  Formed into two flattened disks, and let rest, covered, at cool room temperature (66 degrees) before rolling.  Formed filled crostata in pie pan larger than desired finished size; this helped contain the fruit juices, and made it easier to fold the dough over the fruit around the edge.  Result:  dough was much easier to roll and shape – it didn’t fall apart.

Testing 7/14/12: This time I used the Pasta Frolla recipe (1 ½ recipes) – see testing for that dough on the Pasta Frolla recipe page. I let the dough rest (in two flat discs) 18 hours in fridge overnight (because of the egg). It was quite solid when I removed it in AM so let it warm for 5 hours before rolling. Both tore when I transferred it to pans, and also when I folded over filling, so I had to piece and patch. Made filling as per recipe, using 1 bag frozen blackberries and a handful of strawberries, with a few blueberries sprinkled around.  I had enough dough scraps to make a third, smaller tart, which I filled similar to the other two. The larger tarts baked about 40 minutes; the smaller one 32 minutes. The flavor is outstanding: slightly tart, nicely sweet, and the crust is very tender. 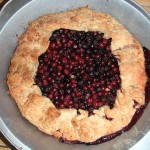 (pastry and photo, left, by Cat; although I called it a Galette, it could just as easily be called a Crostata)

To continue testing my Pasta Frolla recipe, I made a huck tart for a friend who picked the hucks for the tart as well as extra for my use. I followed the Mixed Berry Crostata recipe above, using 1 ½ cups rinsed and drained huckleberries for one tart. (I used frozen blackberries and just a few hucks for the second tart, for myself).

This test was a huge success – my friend loved her tart, and I was very pleased with mine. See testing, below. 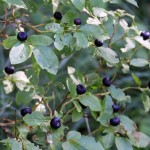 Huckleberries in the Wild

Pasta frolla as above; however, I cut in cold butter rather than room temperature -it was more work but the dough held together better after rolling. Filled one tart with huckleberries for a friend (she’d just picked them), and the other with blackberries and a few hucks. I rolled thicker so only had enough scraps for a few cookies. The huck went into oven first and baked 40 minutes. The other baked 43 minutes. Result:  as not only did my friend love her tart, but I made the pastry with cold rather than room temp butter, and didn’t chill the pastry after mixing), and it held together much better. It was also extremely flakey.