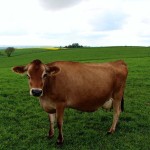 This blog post was originally part of my podcast blog which linked a tune with a pertinent article. In this case, the tune was Eric Clapton’s version of Milkcow’s Calf Blues (2), written by Robert Johnson. Click the link to listen on YouTube, or read the lyrics on Metro Lyrics.com (3).

A June 14, 2008 article in the Daily InterLake (1) on the closing of Meadow Gold Dairy has me thinking about the future of milk in the Flathead.  Now both of our local dairy farmers have joined a cooperative in Bozeman. [2017 update: Hedstrom’s dairy began to pasteurize and process all of their milk under the brand “Kalispell Kreamery,” in 2009-2010].

Perhaps the time has come for truly local milk.  Our farmers are interested in forming a local cooperative, but would enough Flathead families support a local dairy?  Or perhaps farmers with a few dairy cows could sell milk to neighbors. Will Montana follow California’s lead and initiate a raw milk certification program, to make healthful raw milk legal here?  Only if we, the consumers demand it.  But, why should we?

Something to Think About

Have you given up milk because you suffer from allergies, asthma, lactose-intolerance, stomach or head aches?  You may not believe this, but it is likely that ultra-pasteurization of most commercial milk is what causes these problems.

I want you to consider the possibility of raw milk for your own diet, because as food scarcities arise, raw milk will become an important and inexpensive form of very nutritious food. Besides drinking raw milk, you can make butter, yogurt, buttermilk, kefir, sour cream, creme fraiche, puddings, custards, ice cream, soups, etc. using raw milk. Or use it to preserve meats, sooth sunburned skin, or clean your face!

Considered a perfect food, milk is high in protein, vitamins, minerals, and enzymes.  But only if the milk is raw.

Raw milk as a cure

Most people who get sick from drinking commercial milk, usually improve greatly after switching to raw milk from clean, healthy cows fed on pasture.

Furthermore, up until the 1930s or so, raw milk was used as a cure for many diseases including diabetes and tuberculosis.  The Mayo Clinic developed its fame in part because it used raw milk as a curative agent.

Most commercial dairy farms have huge herds.  In order to reduce labor and feed costs, much of the process is mechanized and the cows are kept in small pens.

NPR interviewed a NY farmer who once had a herd of 2,000 cows and would not drink his own milk.  As he put it: “When employees are milking cows at two in the morning, something could go wrong that nobody would ever know about.  It might be an honest mistake, but it’d be a dangerous honest mistake.”

When he reduced his herd to only 22 pampered and pastured cows (they are cleaned daily and milked by hand in a totally clean environment), he drinks their milk raw.

The key to healthful milk lies in how it is produced.  Most commercial milk, is NOT A HEALTHFUL FOOD.  Why?  Because it comes from cows fed an antibiotic-laced grain feed; it is highly processed by pasteurization and homogenization; and it is often injected with genetically modified hormones (rBGH or rBST).

See Problems of Commercial & Ultra-Pasteurized Milk and Why Pasteurize Milk? for more on this.

Drugs in Your Milk?

Do you really want your family to drink commercial milk?