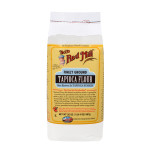 There are times when you don’t want to use flour to thicken a fine sauce or pudding. Read on for information on the most common thickeners.

Flour is ground seed, which may be further processed by removing the bran and germ of the seed (“white” flour).

Starch is more highly refined than flour and may come from other sources besides seeds (for example, roots), resulting in polysaccharides of glucose (long chains of glucose, or glucans). Note that some plants produce a similar polysaccharide that is termed ‘fiber’ because we cannot digest it; it consists of long chains of fructose, or fructans, and is also called inulin. Starches are not soluble in cold water or alcohol, but will dissolve and thicken in warm water.

This is a popular thickener, but most brands available are now GMO. If you want to use cornstarch, use one that is Organic and/or Non-GMO, such as Bob’s Red Mill’s brand. See the Village Bakery post (20) for lots of good substitutes for cornstarch, some of which I’ve never considered before, such as ground flax seeds, glucomannan, and sorghum flour.

I’m just learning how to use this flour (that I get from a Montana business: Granite Mill Farm in Trout Creek MT (18)), but I’ve long known about its many health benefits.

Sprouted grain flour can be used in recipes calling for regular (un-sprouted) flour.  However, some adjustment in moisture might be necessary, because sprouted grain flours are drier than regular flour.  The added moisture can be fruit juice, water, milk, or a liquid sweetener (honey, molasses, or maple syrup).

There are many health benefits for using sprouted-grain flour instead of regular flour. For example, sprouting breaks-down the lectins (toxic substances in the grain). It also partially breaks-down the gluten, so that even gluten-sensitive people and Celiacs may be able to tolerate the sprouted flour (if introduced slowly into the diet)

. And it increases the nutrient value of the flour; the following is a quote from The Healthy Home Economist (19):

Sprouting a grain before grinding into a flour increases the nutrition of the grain substantially.  For instance, vitamin C is produced by sprouting grain, but it is absent in the unsprouted form.  Vitamin B content is increased dramatically by sprouting as are carotenes.  Irritating substances in the hull of the grain are inactivated by sprouting as well.  These inhibitors (phytic acid) have the potential to neutralize the enzymes in our digestive tract and block mineral absorption, so sprouting exponentially increases ease of digestion as well as nutrient absorbability.

Much media attention has been focused recently on the problem of aflatoxins in grains. Aflatoxins are potent carcinogens and are present in high quantities in highly processed foods such as crackers, cookies, chips, and cereals. Sprouting inactivates aflatoxins, which is just another reason to follow the wisdom of traditional peoples in grain preparation!

The following is from Mercola (17); note that the numbered references in the quote (7, 8, 13 and 14) refer to references in his posting, not mine:

Tapioca starch is produced when a starchy liquid is extracted from the cassava root via evaporation or by squeezing the ground root. The result is a fine white powder that’s dried and often sold as flour or pressed into flakes or “pearls” that must be boiled prior to eating. Tapioca starch can be used as a flavorless thickener for soups or stews. It can also serve as a binder when added to burgers and dough, because tapioca can boost the texture and moisture content of these foods without causing them to become soggy.

What makes tapioca starch special is its potential to be a good alternative to wheat and other grains. It is a good source of digestive-resistant starches, or low-viscous fibers that are able to resist digestion in the small intestine and at the same time, slowly ferment in the large intestine. 7

Resistant starches can also serve as prebiotics that feed bacteria, and these do not make you feel gassy because of their slow fermentation process. These starches can also add bulk to your stools, assist with maintaining regular bowel movements and help with satiety, or making you feel full longer. 8

Another benefit of resistant starches is the low possibility of blood sugar spikes, because they are indigestible in the first place. Additional research also confirmed that these starches may help with improving insulin regulation and lowering risk for insulin resistance, potentially assist in reducing blood glucose levels after a meal13 and aid with managing metabolic  syndrome.14

See my 'About' page
View all posts by Cat →
This entry was posted in Flour, Starch and tagged agar, arrowroot, cornstarch, potato flour, potato starch, tapioca flour. Bookmark the permalink.