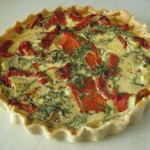 Many people consider this to be the classic quiche: onion, gruyere cheese and bacon in a custard base. But did you know that the original Quiche Lorraine (from the Alsace-Lorraine region between France and Germany) did not include cheese or bacon?

I include two recipes here.  The first is a version of what we know in America as the classic Quiche Lorraine, containing the mandatory onion, bacon and Gruyere cheese. The second is an original 1905 Quiche Lorraine (translated from grams to pounds and cups).  You will note this recipe does not include bacon nor cheese!

About ingredients for Quiche Lorraine

The filling for this recipe is adapted from one in the Daily InterLake, December 12, 2007 (I did not make note of their source), and the Quiche Lorraine served at Crepe Faire Restaurant in Portland (it is no longer in business).

The original newspaper recipe is for a low fat ‘quiche’ using turkey bacon, egg whites, evaporated skim milk and low-fat milk.  It also called for a commercial frozen pie shell.  But anyone who knows me, will anticipate that I changed these to real bacon, whole eggs, raw cream and milk; and I make my own Pâte Brisée crust (adapted from Simca’s Cuisine cookbook by Simone Beck (2)).  Alternately, you can use my whole grain pie crust for 10-inch Quiche pan, or 9″ deep dish pan recipe.

Another change I would make is to skip the use of cornstarch to thicken the custard, because I like my custard to be more creamy and less cake-like. But I include it in the recipe as an optional ingredient, and note that it should be Organic or non-GMO cornstarch to avoid GMOs.

This recipe is quoted from A Passion for Vegetables, by Anna Gewanter (3). The crust is made free-form on a baking sheet, but you could make it in a quiche pan.  You can also add your own seasonings, cheese, bacon or other meat or seafood, and veggies to the filling.