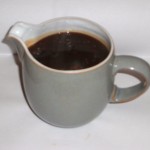 According to Wikipedia, “Gravy is a sauce, made often from the juices that run naturally from meat or vegetables during cooking”

Making gravy is an art.  So much so, that many cooks buy canned gravy or powdered gravy mixes. This is especially true in many restaurants. But these products are loaded with things you don’t really want to put in your body, like MSG, gums, artificial flavors, and such. So if you are like me in wanting to avoid processed foods, then knowing how to make a good rich gravy without lumps is a real boon.

If you’re doing keto, traditional gravies thickened with starchy flour is not for you. However, you can follow the same recipes but substitute coconut flour for the starchy stuff; however, coconut flour may not be able to make a dark roux). See Thickening Sauces or Mercola’s recipe (2) for more.

In the November-December 2004 issue of Cooks Illustrated magazine, they presented a master recipe for turkey gravy, using a browned roux.  It takes a little work and patience, but is well worth the effort to do it right.  Also, if you follow their instructions, you will not have any lumps in your gravy.

This method can be applied to other gravies as well.  For example, beef gravy, using Beef Stock in place of Chicken Stock. [Speaking of which, make your own stocks, as canned/packaged broths/stocks are loaded with artificial ingredients and MSG. See Soups and Stocks Menu for recipes.]  You can also make a brown gravy using vegetable broth.  The key is the browning of the flour/butter roux.

For light colored cream or country gravies, a similar approach would be used, except that you would not brown the roux; rather simply cook it for just a few minutes, before adding the liquid.