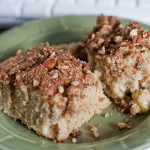 Coffee cakes are amongst my favorites to make, mainly because they are not expected to be elegant. And they often contain healthful fillings including nuts, fruits, and creamy cheeses. However, they are also usually quite sweet, something I need to avoid, so I make mine using mostly stevia as the sweetener (but I provide the sugar equivalent, for those who want the real deal). 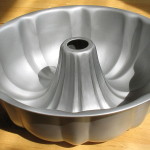 This recipe, like many contains a filling or middle layer from several choices, and is baked in a tube pan (such as for Angelfood Cakes) or Bundt pan, then decorated with a vanilla glaze. (photo of Bundt pan, left, from Wikimedia Commons).

I’ve adapted two versions of this cake from the Betty Crocker Cookbook. My preference is to make this with part whole grain flour, part unbleached white flour and using a pre-soak to maximize the nutritional value of the whole grain. But I also provide my adaptation of the original Betty Crocker recipe, mainly for reference. While the original uses all-purpose flour, I have changed this to unbleached flour to avoid the toxic bleaching agent. I’ve not yet tested either version. Either version makes a fairly large cake, made in a Bundt or tube pan, topped with optional sugar glaze.

I provide four different filling recipes in separate post. These include:

Since the original recipe includes sour cream, this is an easy conversion. However, you may prefer to use yogurt or buttermilk, which is softer and easier to mix with the flour for the presoak. A small amount of sour cream is reserved for the ‘next day’ portion of the recipe; you should use real dairy sour cream for this.

I like to use spelt but you could use any whole grain flour. However, this is written for spelt which requires less added moisture than wheat and other grains, so if you use a different grain, use more moisture for the soak (water, milk or sour milk)

I’ve not yet tested this specific recipe, but I’ve tested the method many times.

You can make this with all white flour, as the original Betty Crocker (1) version, or part white, part whole grain flour, but use at least 1 cup of white flour. And you can use all sugar or part stevia and part honey or maple syrup. I’ve abbreviated this version as a reference; I would only make the pre-soak version.

This recipe is adapted from the Betty Crocker Cookbook (1). While it requires powdered sugar (stevia will not work), I prefer Rapdura powdered sugar if you can find it, or you can Make your own Unrefined Powdered Sugar). Why this preference?  It’s made from dehydrated juice of sugar cane, so still has all the molasses, vitamins and minerals intact.

However I’m avoiding sugar so I would make my coffee cake without the glaze.