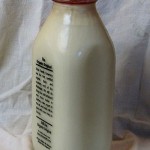 Whipping cream is a lost art, as most people buy frozen whipped ‘cream’  that is not cream at all. A major problem with frozen product is that it is not made with cream and contains a lot of non-dairy products that may not be very healthful.

Back when dairies started ultra-pasteurizing their milk and cream to extend the shelf-life as dairies consolidated, homemakers discovered that their whipping cream did not whip up well – if at all. This is because the ultra high-heat and pressure required for ultra-pasteurization alters the structure of the cream so that it will not incorporate air.

On the other hand, raw cream (and regular pasteurized cream) whips beautifully, and is sooo much better for you. It is so fluffy and lightly sweet, melts in the mouth, and adds that special something to any dessert.

I also like to culture cream slightly with real buttermilk to make Crème Fraiche, and then whip it.  It is wonderfully velvety.  It can be sweetened, or used as is.

See my 'About' page
View all posts by Cat →
This entry was posted in Dairy, Extract, Flavoring, Sweetener, Whipped and tagged cream, creme fraiche. Bookmark the permalink.