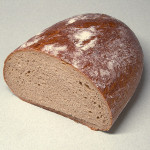 Bohemian Rye is also known as Deli Rye, most commonly used as sandwich bread, but I also like it as toast. It is medium-rye in flavor, and spiced with caraway seeds.

Rye is a true grain, but is lower in gluten than wheat. As a flour, it comes in different grades of wholeness, from light rye (the rye equivalent of unbleached white flour, containing primarily the endosperm), to whole rye (contains the bran, germ and endosperm). See Sourdough Home: Rye Types (2) for a great discussion of the types of rye, and which are the best to use for different purposes. He recommends medium rye, which is a comparable mix of light and whole rye.

In my research for sourdough recipes, I keep returning to Sourdough Home (1) for recipes, general info, and inspiration. And that’s where I found these recipes.

This recipe is adapted from Sourdough Home’s Original Bohemian Rye (3). The original recipe uses a white flour starter, so calls for more rye flour and less white flour. I’ve modified amounts of starter and flours to use rye starter. It also calls for medium rye flour, but if you’re grinding your own, you will get whole-rye flour, so use a whole-rye/light rye mix as indicated.

He has since updated his recipe because medium rye flour is hard to find. The new version,  New Bohemian Rye (4), uses a rye starter specially activated for strength, and bread flour (wheat) for structure. He says that mixing whole rye and light rye (as I did with my adaptation of his original recipe) will not do the trick.

The following is my original adaptation of his original recipe and makes 2 loaves. (With 1-loaf version, for testing, included). Below this is his new version, which I have not yet adapted, tho I have added a few notes.  Not yet tested either version

* NOTE: a banneton is a wicker basket with a cotton cloth liner. The liner absorbs excess moisture from the surface of the dough for a better crust on the bread; the basket helps the rising dough to hold its shape. After the dough has risen, turn the basket upside down onto the baking sheet, then remove the cloth liner. You may see the wicker pattern imprinted on the surface of the dough.

This recipe is adapted from Sourdough Home’s New Bohemian Rye (4), and makes 2 loaves. This version was created when it became difficult to find medium rye in stores, and is quite different from the original version. The only rye is in the starter; the remainder of the flour is a high-rpotein bread flour (wheat).

Sourdough Home recommends using a mixer (stand mixer): “This is a very wet and sticky dough, and you’ll be less likely to add too much bread flour if you use a mixer instead of making the bread by hand.“

Also from Sourdough Home: “As with most rye breads, this is better, and easier to slice, the second day than the first.“

Eventually I’ll get around to adapting this and reducing it to a 1-loaf version for testing. Most bread flour is brominated, which I prefer not to use because of the toxicity of bromine; I’ll have to look into non-brominated high-protein flour.

At least the first time, it’s a good idea to weigh your ingredients in grams (in parenthesis for each ingredient, above), as volume measurements (cups) are not very accurate, especially for flour.