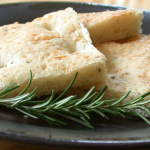 Focaccia (or the Provence version, fougasse) has become part of the American lexicon in the last 10 to 15 years, because of the increasing popularity of Italian foods.  Like other flatbreads, it is an ancient, enduring bread made from a short list of ingredients:  flour, water, yeast, olive oil and salt.

This version is leavened with sourdough starter, which is actually more traditional than yeast.

This recipe is adapted from Sarah’s Musings blog  (1) and Simple Math Bakery blog (2). Sarah’s Musings makes a sponge using part of the flour, then adds remaining ingredients after the sponge-rise. Simple Math mixes all ingredients (using a stand mixer), before the short rise. I think I like the sponge method best, but that recipe uses a lot more flour. I hope to resolve this with testing.

These recipes also use different methods to  proof the dough; Sarah’s Musings takes a shorter time than Simple Math method.

I have two sourdough starters now: one is all whole spelt; the other is mostly unbleached white (wheat) that I made by feeding some of my whole spelt starter with the white flour, but I never got around to testing this before my grain sensitivities were discovered.

I love the flavor of whole grain spelt so will probably use that with a wheat starter.

Testing 8/30: Made half-recipe using ⅓ cup each whole spelt starter and mostly-white starter. To finish the bread, I used semolina and unbleached white flour as written, using not quite 2 cups of the white flour. Sponge rest was about 1 hour. Second rest (after adding oil, salt and flours) was about 4 hours – it hadn’t risen after 1 ½ hours, probably because my kitchen was only about 62°F, so I let it continue to rest while I went to an appointment. When I returned, it hadn’t risen much but was softer, so I shaped it onto my oiled jelly roll pan. Covered it with a cloth and after about 30 minutes, I lifted the cloth but it had stuck to the dough. I scraped off what I could, re-shaped, and left to rest uncovered for another hour. In future I will cover with oiled paper (or no cover at all). Brushed with the oil/herb mix (used both fresh and dried rosemary), and waited for oven to preheat. Baked 18 minutes. Result: It had browned on the underside but still a bit pale on top. it did not rise much in the oven. Flavor is slightly sour but could use more salt in the topping.

See my 'About' page
View all posts by Cat →
This entry was posted in Baked, Fat or oil, Flour, Herbs, Leavening, Sourdough, Sweetener and tagged flour, honey, olive oil, sourdough. Bookmark the permalink.