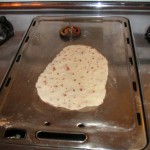 Cooked lefse on my griddle

I won’t deny it, my favorite flatbread is Norwegian Lefse, made with potatoes, butter, milk and flour.  But there are many other delicious flatbreads that deserve attention; most of them are of ancient origin and highly ethnic.  All are relatively easy to prepare (easier than standard yeast breads).  Because the popularity of ethnic foods is on the rise in America, you’ve probably heard of most of these, and maybe even eaten or made them at home.

Of course, this list is not complete. (Flatbreads in blue text are featured on my site).

I was inspired to write this recipe article because a January 2, 2008 issue of the Daily InterLake (DIL) newspaper here in Montana featured flatbreads.  Today, most flatbread recipes use white flour, but this is not traditional.  Because breads made with white flour lack the nutrient quality of sprouted or whole grain flours, and can cause spikes in blood sugar, I would not recommend eating them on a regular basis.  Instead, try my whole grain versions, which I hope are closer to traditional.  Whenever possible, I incorporate a sponge rise in my recipes, which improves the digestibility of the flour as well as the bio-availability of the nutrients.

Notes on Ingredients and Equipment for All Recipes:

Some ingredients are used in only a few recipes.

Butter:  I always use unsalted butter made from the milk of grass-fed cows in my recipes.  Most commercial butters are made from confinement dairy cows fed a diet of grains instead of grass, and are of inferior quality, nutritionally.  Kerry Gold Butter from Ireland is an excellent butter to use.  Tillamook butter is also pretty good, since these cows are mostly pastured.

Flour: I’m very fussy about the flour I use; first and foremost, it must be Organic or better.  For wheat breads, I prefer a hard wheat flour, as it has a higher level of gluten.  The new white hard wheat variety is a lighter flour than red wheat varieties, and gives a wonderful result.

Some recipes also call for a bit of unbleached white or semolina flour, but in my recipes, whole grain flour will dominate.  Refer to my article on Flour for sources and more information.

Ghee:  Also known as clarified butter, this is used to brush Naan and other East Indian breads.  Refer to my article on Ghee for more, and for instructions on making it at home.

Milk and Cream:  I strongly urge you to consider using raw milk/cream.  If these are not available, choose an Organic brand that is pasteurized but not homogenized.

Potato:  Use a good baker type, such as Yukon gold or russet.  I prefer the Yukon gold variety.  Do not use boiling potatoes such as red or fingerling, as they are too moist.

Salt:  You can use table salt or, my preference, Celtic sea salt in the dough.  But for the toppings (such as on focaccia), the coarse sea salts or Kosher salts are a must.

Sweetener:  This is usually honey, as it is quite common in traditional cultures.  But you could use maple syrup or molasses, or dried cane syrup (Rapadura or Sucanat sugar).

Water:  I use filtered tap water in my recipes.  I do not recommend water stored in a plastic bottle or jug, as toxic chemicals can leach from the plastic into the water.

Water used for proofing yeast must be heated to about 1050 F.  If filtered water is not available, boil the water first for a few minutes, and then allow it to cool to 1050 F.

Whey:  Whey is the clear (or slightly white) watery protein fraction of milk.  It is made by fermenting or heating the milk to curdle the casein fraction, and then passing it through a sieve.  Whey is rich in lactic acid and probiotics.  However, when using in a yeast bread for its acidic quality (such as for pre-soaking flour), the whey must be mixed with boiling water to deactivate the probiotics.  Otherwise, these good bugs would compete with the yeast for the sugars in the flour, and your bread will not rise as well, and could have a ‘beery’ flavor.

Yeast:  It is hard to find fresh cake yeast anymore, but if you can find it, I recommend using it instead of the active dry yeast cited in my recipes.  I use Bob’s Red Mill dry active yeast, but any dry active yeast will do.  1 package is about 2 ¼ tsp.

If you make a sponge (using all the liquid but half the flour), less yeast is needed than when a sponge is not used.  This will produce a less yeasty, more wheaty bread.

The focaccia recipe uses a sponge-like method, but all the flour is included.  The final dough is very soft.

Yogurt:  Unless specified otherwise, it must be non-sweetened, plain, whole milk yogurt.  I make you own yogurt from raw milk.  If using in a yeast bread, like whey, it must first be mixed with boiling water to deactivate the probiotic bugs that would otherwise compete with the yeast for the sugars in the flour, and your bread will not rise as well, and could have a ‘beery’ flavor.

Baking Pan:  A pyrex glass baking pan, steel 10 x 15 jelly roll pan or baking sheet will work for most recipes.  Or you can use a baking stone. I do not like to use aluminum because most breads are slightly acidic and can leach the aluminum from the pan into the bread.

Baking Stone hints:  Place baking stone on oven rack in lowest position and then preheat oven and stone together.  Dust a pizza peel with cornmeal and place the stretched out dough onto the peel (try tossing the ball of dough like a pizza dough, to stretch it into a round).  Use peel to transfer dough to the hot stone (not an easy task); then use it again to remove the baked dough from the stone. DO NOT REMOVE stone from oven until it has cooled thoroughly.

Most stones are highly porous, so you don’t want to immerse them in water.  Instead, wipe clean with damp cloth.  They will stain and discolor with time; this is unavoidable, but also makes the stone work even better.

See my 'About' page
View all posts by Cat →
This entry was posted in Equipment, Main Ingredient(s). Bookmark the permalink.