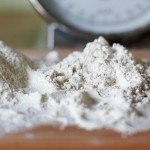 Back in 2007, I learned about the health benefits of sprouting grains (and other seeds), so I ordered a sampling of sprouted flours from Summer’s Sprouted Grains (1).  This came with some information comparing spelt and wheat that applies to both sprouted and un-sprouted grains, when used in baked goods (cookies, cakes, breads, quick breads, pastries, etc.) and in pasta.

I have many recipes adapted for wheat and for spelt. I much prefer the flavor and nutrient quality of spelt, but it does pose some minor challenges when adapting a wheat recipe.

First, a look at the nutritional differences and similarities of the two grains; then some tips on converting recipes from wheat to spelt (and vice-versa).

Nutritional Comparison of Wheat and Spelt

Spelt is in the wheat family (Triticum), but is a much older grain. Like its cousin emmer (faro), it is a close relative of wild wheat, and contains gluten (although spelt’s gluten is different from wheat gluten). Unlike wheat, spelt’s protein (including gluten) is more soluble in water. See also Other True Grains on spelt.

However, Summer’s Sprouted Flour indicates its nutrient content to be “nearly 50% starch, 50% protein.” I cannot account for this difference in cited protein levels.

Modern wheat has been extensively hybridized from its older versions; some of the hybridization has been to increase its gluten content. Modern versions include:

In general, wheat has higher starch and lower protein content than spelt, which makes wheat lighter and fluffier in baked goods than spelt.

However, Summer’s Sprouted Flour indicates wheat’s nutrient content to be “nearly 92% starch, 8% protein.” I cannot account for this difference in cited protein levels.

Adjustments for wheat vs spelt in recipes

The following recommendations apply to any recipe calling for 1 to 3 cups flour (1):

See my 'About' page
View all posts by Cat →
This entry was posted in Flour and tagged spelt, wheat. Bookmark the permalink.