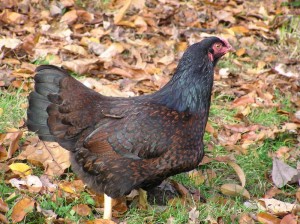 A couple years ago, I roasted a Cornish game hen and Rosemary/Apple Stuffing for Thanksgiving. This year I will try a different dressing of wild rice with cashews and mushrooms, basing this on my Wild Rice with Cashews & Mushrooms side dish, and a recipe from the All Recipes site (2).

See my testing for Thanksgiving, Nov 23 – 24, 2016. I’ve adjusted the recipe per my testing. It makes too much stuffing for one game hen (2 servings plus some leftovers); it is better suited to two game hens, or cutting the stuffing recipe in half.

This recipe was originally adapted from Cornish Game Hens with Rosemary and Apple Stuffing (1) on Food.com. Now I want to try a different dressing. NOTE: I call it a dressing because I don’t stuff the bird with it; instead I roast it separately alongside the bird, or I place the partially-roasted bird on top to finish roasting (this is to avoid risk of undercooking).

This stuffing is adapted form my Wild Rice with Cashews & Mushrooms side-dish, and Wild Rice with Rosemary & Cashew Stuffing from All Recipes blog (2). This version uses a long-cooking method for the wild rice (using chicken stock for the last water addition), to break down the anti-nutrients, that is not included in the original All Recipes version.

The original All Recipes version makes enough stuffing for a small chicken; I’ve reduced it somewhat, but it still makes enough for 2 game hens plus leftovers. You can reduce stuffing by half if only making one game hen.

Stuffings/dressings are listed below the bird recipe

* Alternately, you can slow-roast with oven preheated to 3oo°F, then reduced to 250°F when you add the stuffed bird (or just the bird, and roast stuffing separately in 350°F oven).  I’m not sure about the stuffing, as I’ve not tested this recipe for slow-roasting yet.

11/23-24/2016: Brined bird, then set to marinate on Wed, 11/23. Started the stuffing at 1:30 PM on 11/24 with pre-boiling the wild rice 2 times, then added the white rice to rest until ready to put stuffing together. Forgot to thaw chicken stock so that delayed things a bit. Stuffing: Started prepping veggies  at 2 PM. Chopping cashews with a knife isn’t easy as they want to jump around…so I switched to my Kuhn-Rikon chopper (image left (4)). Snipped rosemary with scissors, a few at a time. Added about 1 Tbsp butter, divided, with mushrooms and cashews because mix was too dry. Used same skillet rather than transferring to saucepan, for adding broth and rice to cook; needed simmer plate to keep at slow simmer. Checked after 30 min: not tender yet. Nice flavor, but decided to add some thyme, and about 2 Tbsp stock Simmered another 15 minutes; almost tender. Transferred to baking dish; it will finish in the oven. Meanwhile, took marinating bird out of fridge at 3:45 PM to warm, and left oven on. Roast: Increased oven to 375° at 5 PM and placed bird in oven at 5:15. basted bird, and put stuffing into oven at 5:45. Baste again and remove cover from stuffing at 6:15. Baste again at 6:30, and removed stuffing from oven, re-covering with lid and kept in warm place (near stove’s pilot light). Out of oven at 6:45. Transferred bird to a platter and tented with foil. Scraped drippings to skillet and added ½ cup chicken stock to make sauce, thickening with tapioca starch. No additional seasoning needed. Result: Hen is wonderfully delicious, as is the sauce. The stuffing has a nice flavor, but most of the wild rice in didn’t crack open, so were tough and hard to chew. Next time I will cook them after the 3rd boil until most have cracked open, before combining with other ingredients. Recipe updated accordingly. I also added instructions for the sauce made from the drippings. Future testing: I will either reduce stuffing recipe by half, or just make the regular Wild Rice with Cashews & Mushrooms.