I absolutely love this way of making pie crust, and it has the added benefit of  making the minerals and other nutrients in the grain more available by use of yogurt and the overnight soak. The result is very flaky and richly flavored. I prefer to use spelt, as it has more of a nutty flavor than wheat, but both are really good.

The first version uses more yogurt for a nice tart flavor that goes well with savory pies such as mince meat or Lebanese Spinach Pie. The second version uses only a small amount of yogurt and is thus suitable for sweet pies made with fruit or pudding, or lightly-savory quiche.

Although you can use all white flour in these recipes, white flour doesn’t benefit much from a presoak (yogurt), health-wise. Presoaking flour is important for whole grain flour, however, as it begins the breakdown of the toxic lectins present in the bran and germ of the whole grain.

I include two version of the type of crust below.

This is an all purpose dough for two 10-inch tart or pie shells, or one 10-inch 2-crust pie, or 8 – 10 individual pocket tarts.  Recipe is from Nourishing Traditions (1).

Spelt poses a special problem because it is water soluble, and with all the yogurt, it makes the dough too soft. The solution is either to use less yogurt of more flour; I prefer to use more flour.

4/19-20/2014: The 20th is Easter, and I’m roasting a leg of lamb which I like to accompany with Lebanese Spinach Pies. I like using this yogurt crust recipe for those pies but have not made it for some time. This time I’m making a half-recipe and using hard white whole wheat instead of spelt. My spelt version calls for 1 ¾ cup flour for a half-recipe, so I started with 1 ½ cup of whole wheat. It was hard to mix with the ½ cup each yogurt and butter, so I added about 1 Tbsp water and that brought it to the right texture. I’ve updated the recipe (above) appropriately, for a whole recipe (3 cups whole wheat or 3 ½ cups whole spelt). Covered tightly with a sheet of waxed paper around the ball of dough, placed that in the bowl and covered bowl with cloth. It gets cold in the house at night, so I set it on top of a trivet on my pilot-lit stove so that it will not get too hard to work tomorrow. 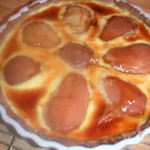 Image, right, is my popular Tarte aux Poires, which uses this pre-soak crust recipe pressed into the quiche pan.

I prefer this version (over previous), adapted from Make a Home Mom (2)(MAHM) blog,  for fruity or other sweet pies. It uses less yogurt, mixed with ice-cold water (so you don’t have to cream the yogurt with butter, which is difficult to do), than the previous recipe.

The recipe is for a 2-crust pie in 9″ pan. See Modifications, below, for other pan sizes and single-crust variations.

This recipe is very similar to regular pie crust recipe, except part of the moisture is from yogurt.  One should use pastry flour, which is a soft wheat flour (less gluten). Spelt flour is more like pastry flour than hard or all-purpose flour, so is a good substitute, and actually, I prefer its nuttier flavor.

When using wheat, start with 3 Tbsp water (you start with less if using spelt); then add more as necessary. Makes one 2-crust set, or crusts for 2 single-crust pies, or about 14 each 4″ rounds for tarts/turnovers. See below for other pan sizes, one-crust ingredients.

Tested 6/21/10: Made half recipe, with mix of spelt, oat and barley. Easy to make, good flavor and rolls nicely. See Testing Details, below.

Unless otherwise noted, these versions use spelt flour; if using wheat flour, add more warm water for the presoak.

My small 7.5” round ceramic pie pan

NOTE: this flour mix uses spelt, so needs less relative moisture than either the 9″ or 9×13″ pan versions. If using wheat flour, will need about 1 Tbsp additional water, Also makes a bit more than needed for the quiche pan, unless you want a thick crust.

Testing 6/20-21/10: Made for small pie, with 3/4 cup spelt, 1/4 cup each barley and oat, 3/8 tsp each salt and sugar, 2 Tbsp melted butter and 1/4 cup cold butter (6 Tbsp total butter). Mixed 1 Tbsp yogurt with 2 Tbsp ice water, but it was too much liquid – spelt doesn’t need as much. So I added 1/4 cup additional spelt and then again, before texture was right (total 1/2 cup extra added). This was probably too much handling. Wrapped in waxed paper for the overnight rest. Next day, pressed it (rather than rolling) into pie pan to make a small berry kuchen (half the Peach or Plum Kuchen recipe). Result: crust is more tender than I thought considering how much I worked it. It was easy to press into pan, too. Nice flavor. Next time, I’ll use original amount of flour but start with only 1 Tbsp water for half recipe (2 Tbsp for full recipe).

The butter was supposed to be 4 T melted and 9 T cold. But I mistakenly melted 1 cube (8 T), and when I mixed it with the dry ingredients, the dough was very “wet.” So I cut in only 4 T cold butter (instead of 5). And I used only 1 Tbsp water with the 1.5 Tbsp yogurt. The dough was very soft so I formed it into a ball and let it rest, thinking all was well.

Outside temps have been hovering below zero, so admittedly my house was probably not as warm as usual. The crust was quite hard to roll out – it kept splitting, leaving cracks. I filled in the cracks, but it was very fragile and impossible to crimp the edges in the pan. I lined the crust with parchment and filled with dry beans for the first baking. When I removed the parchment & beans, pieces of the crimped edge fell off. After the second 10 min bake, tiny cracks formed in the crust as it set. I brushed a bit of egg over the cracks, so the filling wouldn’t leak through.

Conclusion: The crust was nicely crumbly and had good flavor, but if I do 2 pies together next time, I’ll follow instructions and use 4 Tbsp melted butter, then cut in 9 Tbsp cold butter. And I’ll use 2 Tbsp water with the 1.5 Tbsp yogurt. But I’ll probably have the best luck if I mix each crust separately.

Testing 1/4-5/13: I had been having great success with this recipe since 2010, until August 2012 when I decided to give up grains for 3 weeks to see what would happen when I restarted them; I used a ground almond and coconut flour crust in the meantime. When I made this recipe again after that experiment, it just wasn’t right. It wouldn’t hold together for the overnight rest. I tried adding more water but that made it tough. More butter helped but it still wasn’t right. I used 1 1/2 cups whole spelt and 1/2 cup whole wheat (total 2 cups flour). Sifted with stevia and salt, then worked in 3 Tbsp melted butter followed by 5 Tbsp cold butter (total 1/2 cup) << here is the error – s/b total 12 Tbsp butter (3/4 cup). Mixed 1 Tbsp yogurt with 1 Tbsp cold water and mixed that in but way too dry. I added another 2 Tbsp water, and it sort-of formed a ball but felt dry. Next day it was difficult to press into the pan because it was dry. It baked well and isn’t tough, but I think it could have used more butter. My regular recipe (9” 2-crust) uses 2 cups wheat flour, 1/2 cup butter and 4 Tbsp lard, total 3/4 cup fat, and 4 – 7 Tbsp water.

Testing 1/29-30/2013: for kuchen: This time I used 2 cups flour (1 1/2 c spelt, 1/4 c each kamut and barley), plus stevia and salt as in original; 3 Tbsp melted butter (as b4) and 7 Tbsp cold butter (10 Tbsp total). Felt much better and actually formed a ball readily. It was cold in my kitchen the next morning so dough was stiff and a bit hard to press into pan, but it was not too dry. Filled with peaches & raspberries, then custard for kuchen. Perfect!

Testing 11/10-11/19: My pan comes with a red lid (I will use it for a Tarte aux Poires): Sifted: ⅝ cup whole wheat (½ cup plus 2 Tbsp) and 2 Tbsp unbleached white flour (total ¾ cup flours), ¼ tsp salt, and ½ tsp Rapadura. Cut-in 2 Tbsp melted and 3 Tbsp cold butter (cut into smaller squares). Did not need more cold butter. Mixed together 1 Tbsp each yogurt and cold filtered water. It was a bit too damp and soft so added another 2 Tbsp whole wheat flour, one at a time, mixing with hands. Covered to rest overnight on counterattack 11:15AM. Next day, pressed into pan.  Will use Tarte aux Poires recipe size for 7½ – 8 inch pan size, to finish the tarte. Result: I probably used too many pear-quarters, because the crust wasn’t quite high enough to contain the custard. Perhaps use ¾ cup whole wheat and 2 Tbsp white flour (total ⅞ cup flours); may need a bit more butter. See Tarte aux Poires testing 10/11-12/19 for final result.

See my 'About' page
View all posts by Cat →
This entry was posted in Baked, Dairy, Fat or oil, Flour, Sweetener and tagged butter, flour, yogurt. Bookmark the permalink.