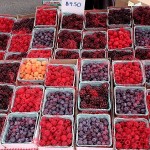 I’m always on the lookout for interesting desserts, especially those that are made with whole fruits and very little sugar. This one appealed to me because of the use of tasty bitter ingredients, such as orange zest, very dark chocolate (high cacao mass), and ‘bitters.’ See Chocolate (About) for more about high cacao mass.

Bitters are a important part of a healthful diet, as  they are very nutritious, and help our digestive system function properly. They are also supportive of the liver and its detox functions. See my article on Digestive Bitters for more.

It’s hard to find whole vanilla beans in my rural Montana community, so I just ordered some and plan to test this recipe as soon as they arrive.

This recipe is adapted from one in our local Daily InterLake newspaper (April 7, 2016 issue), originally by Melissa D’Arabian of the Associated Press (see the Morning Journal (1) for an online version of her original recipe). She uses raw coconut sugar as the sweetener, And angostura bitters as the bitters formula. I propose the following modifications to this recipe:

This recipe is quick to make, although it does require a minimum of 30 minutes for the sauce to steep.