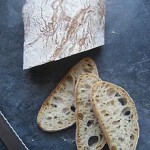 Ciabatta is an “Italian white bread created in 1982 by a baker in Adria, Veneto, Italy in response to popularity of French baguettes” (1), using commercial yeast (S. cerevisiae) as the leavening. It is an Italian rustic bread, with soft spongy interior and crispy crust, and with a slight sourdough flavor that comes from an overnight ferment.

The first and only version I’ve made so far – Ciabatta Integrale in this post – uses commercial dried yeast to make a pre-ferment which is then cultured slowly overnight – similar to a sourdough sponge recipe, followed by an autolyze step which hydrates the flour for a better result. I wanted it to be at least part whole grain; what I came up with is roughly half whole grain, half white flour.

Ciabatta is an Italian rustic bread, with soft spongy interior and crispy crust, and with a slight sourdough flavor that comes from an overnight ferment. And while most ciabatta is made from white flour, it is indeed possible to make it with some whole grain flour (hence the word ‘integrale‘ in its name – it means ‘in-tact’ or “with everything’).

I use two online recipes as the base for testing:

Both use white bread flour (see about White Bread Flour, below), which is more highly processed (including bleaching with bromine, a process that has negative health consequences), and has a higher protein content than unbleached all-purpose white flour. I prefer to use the latter, but at 5 oz/cup it is more dense than bread flour at 4.75 oz/cup. Thus it may require less unbleached white flour than the white bread flour in the original recipe, something I didn’t take into account for my original test recipe.

The KAF method involves a specific stretch-and-fold process to create the gas bubbles that become the holes after baking. See The Fresh Loaf: Stretch-and-Fold Lesson (3) for illustrated instructions. Trinigourmet blog (6) has excellent photos of preparing the dough according to the Gourmet method; note that it is also uses bread flour (white).

The KAF recipe calls for nonfat dry milk, and ‘instant yeast’, both of which I prefer not to use, and ¼ cup oil. The Gourmet recipe uses warm milk and ‘active dry yeast’, which I would rather use, and only 1 Tbsp oil. Otherwise, the ingredients are similar. However, when it comes to the working-up of the dough, the methods are quite divergent: the KAF method takes several hours for the rise and stretch/folding of the dough, whereas the Gourmet method rises in shorter time, with no manual working of the dough.

My gut tells me to follow the Gourmet recipe’s ingredients, but the KAF method for developing the dough. Thus I include the KAF instructions in the “Method,” and the Gourmet instructions (where they differ after the autolyze) under “Gourmet Method.”

6/3/17 update: Turns out my gut was right about which method to follow for instructions. The KAF instructions use a long, slow rise, which is more effective at breaking down the reactive part of the gluten complex, so that people with gluten sensitivity can safely eat the resulting product (per research in Italy regarding slow-rise and its effect on gluten (8,9,10)). Gourmet’s shorter rise time does to have that added benefit.

Bread flour is used because it has a higher protein and gluten content than regular flour, which is desirable for yeast-risen breads because it will support a better rise. But bleaching the flour to make a whiter white flour may involve the use of bromine (similar to chlorine in its bleaching ability). Bromine has negative health consequences that affect the thyroid, by replacing iodine in the thyroid hormones with bromine, which effectively makes the hormones useless. For this and other reasons, I use unbleached white flour.

Feb 2015 update: KAF offers an unbleached white bread flour which I would like to try.

As of this writing, I’m trying to avoid modern wheat, so I prefer to use just spelt, or a blend of spelt, oat and barley flours. I’m experimenting with this adaptation. Spelt requires less moisture and shorter rise time than wheat, but the addition of oat and barley should temper this somewhat.

Feb 2015 update: Turns out, I have a food sensitivity to oat and barley, so any future testing will only involve wheat, Kamut and/or spelt flours.

It would be smart to use wheat the first time, to get the feel of it and how the dough behaves. Then try mixing grains. The fermentation and long rise of the final dough will break down much of the carbs and protein in the wheat (like sprouting), so It should be OK for a wheat-free diet.

As stated above, I use the ingredients from the Gourmet recipe (on Recipezaar (5)) and the method from the KAF recipe (on The Fresh Loaf (2)). I used What’s Cooking America’s Conversion Charts for Liquid & Dry Measures (7) to convert ounces to cups/tablespoons, although using grams is far more accurate and provides the best end-product.

You may be surprised at the small amount of yeast used; this is because of the overnight ferment and long, slow rise.

I’ve not yet updated the original 2-loaf ingredients from my testing, as I believe I should do at least two more tests, one with wheat and one with spelt flour, before being confident in the amounts.

Ingredients for Half recipe (one loaf), for Testing

Method (from KAF, for half-recipe):

Make test recipe using wheat, and remember not to add second bit of yeast until AFTER the autolyze. Form into 4 or 5 mini-leaves to bake free-form.

Then do a test recipe using spelt; it will require less water (or more flour) than wheat version.

See my 'About' page
View all posts by Cat →
This entry was posted in Baked, Fat or oil, Flour, Leavening and tagged autolyze, flour, oil, salt, sponge, water, yeast. Bookmark the permalink.