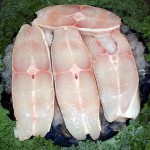 Bone broths have become all the rage, especially for those who are dealing with autoimmune disease, and fish broth is one of the most flavorful. Adding veggies and herbs is optional, but definitely enhances the flavor.

In general, you can use any broth recipe, but if you are doing an autoimmune protocol, replace any butter or ghee with olive or coconut oil, and eliminate any wine or other alcohol. You may also need to eliminate some herbs or spices, especially those that come from seeds.

About ingredients and equipment for bone broth

This is an adaptation of my Fish Stock recipe, with hints from recipes by Dr. Kelllyann (1), Maria Atwood (2), and The Paleo Way (3). My original Fish Stock recipe includes butter (for sautéing the veggies) and wine. However, if you are making the bone broth as part of an autoimmune protocol, butter and alcohol cannot be included. Instead, use olive or coconut oil for the sauté and I’ve omitted the wine.

Dr. Kellyann (1) sautés the veggies before adding the fish trimmings, because the short cooking time for the broth is not enough for raw veggies. She also makes the following recommendations:

Maria Atwood on Selene River Press states in her article, Fish Broth and Your Thyroid (2):

* A bouquet garni is a collection of fresh herbs tied into a bundle, or wrapped into a bit of tied-up cheesecloth, then immersed into the cooking broth.  It is easily removed all in one bunch, when needed.