Insulin is an important, ancient hormone; it:

Thus insulin acts as a double-edged sword in response to excess dietary carbs:  insulin promotes storage of the excess carbohydrates as body fat, and then wards off the body’s ability to lose that fat. (7) For more, read on …

Added in April 2021 update of this article:  The “rules” for diagnosis changed in 1997, lowering the fasting glucose levels, as follows (1):

Prior to that change, the number for diabetes diagnosis was 140 mg/dL.

Insulin’s major role is to control the rate of aging. (2)  It does this by regulating sugar and fat metabolism.  Studies of centenarians reveal there is little they have in common; for example, some never smoke while others are life-long smokers.  Yet there are three things — three metabolic indicators — that are relatively consistent among centenarians:

The common denominator for all three of these indicators is insulin, because it regulates the other two. Cells of centenarians are consistently sensitive to insulin; insulin sensitivity is one of the most important markers of lifespan. (6)

What is Insulin Resistance?

Move this, where: 2018 update: Functional Medicine practitioners believe that Insulin Resistance is result of problems in the mitochondria, the cells’ batteries. For more, see Mercola article (15).

Insulin resistance (IR) is much in the news lately.  It is characterized by two metabolic problems; both of which occur when the body’s cells become insensitive to insulin:

No one really knows what causes the insensitivity to insulin that starts this ball rolling, but there are many theories, and perhaps many causes.  Neither is it known wether the problem is with the insulin receptors on the cell membrane, or with signaling molecules within the cell, or in the mitochondria where glucose is either burned as fuel or converted to glycogen for storage.

The end result, however, is known.  Both serum insulin and serum glucose levels rise, eventually to toxic levels, and at the same time, blood levels of triglycerides and LDL cholesterol rise, and HDL (the ‘good’ cholesterol) levels fall.  And that is when a complex of symptoms begin to appear.  These include: (3)  [See section on symptoms, below, for more specific symptoms of insulin resistance.]

Back in the 1920s when these symptoms began to appear at a greater rate than had been previously observed, doctors recognized them as related.  But as time went forward, the philosophy of allopathic medicine ceased to look at the ailing body as a whole, and began to focus on the symptoms separately, as though they were separate diseases.  This situation persists to this day.  Does the following scenario sound familiar to you?

These doctors are not interested in healing the patient, but rather simply in controlling the progress of the symptoms (making a lot of money for themselves and the drug companies in the process).  This is a very sad state of affairs.

The good news is that the situation is changing.  An increasing number of health researchers recognize the relationship of all these symptoms to insulin resistance (IR), and lump all these disorders together under the name of Metabolic Syndrome, AKA “Syndrome-X.”  They recognize that all these symptoms, each a serious killer in its own right, can be traced back to IR. (3)

And that puts them in a position, not just to control the progression of this disease, but also to help you reverse it.

Note: in addition to the symptoms listed below, I have recently discovered the connection between adrenal fatigue, adrenal exhaustion and insulin resistance. See also my article on Cortisol & Adrenal Fatigue.

The following symptoms occur because there is either too little glucose (hypoglycemia) or too much glucose (hyperglycemia) in the blood, and because insulin controls other hormones that affect the cellular function responsible for the symptom. For more, refer to Healing Daily Article (6). the symptoms are:

In addition to the symptoms listed above are the less apparent (but no less important):

My symptoms, over the years, include:

I note that in 2015, I started taking Pure Encapsulations brand of myo-inositol supplement (a B-vitamin) at the recommendation of my naturopath, taking 1/4 tsp/day in water or added to my morning smoothie. It’s positive effect was amazing! I lost weight, had more energy, and many of the symptoms listed above went away. I continue to take myo-inositol at a higher dose (1/2 tsp/day), to help my liver and keep things in check. See also my article Choline, Inositol, and Insulin Resistance for more about this.

NOTE: I tried switching to a less expensive brand (NOW or Jarrow), but these didn’t help as much so I went back to Pure Encapsulations.

Fasting blood sugar has been the main test for type-2 diabetes, with generally accepted ranges as follows:

However, a 22-year study published in 1999 (16) indicates any reading greater than 85 is “diabetic”. Recommendations: Keep your blood sugar in the range of 70-85 mg/dL – and don’t allow after-meal glucose levels to spike higher than 40 mg/dL.

Type-2 Diabetes is really just an advanced stage of Insulin Resistance, for which anything above 85 mg/dL blood sugar level has long been the indicator, so this should come as no surprise.

Fasting blood sugar level is not the only test that should be run. In fact, fasting blood insulin may be even more important, especially if used to determine ratio between the two levels (from same blood sample).  My naturopath explained this: If your body’s cells run out of fuel during the night while sleeping, the body makes more.

See below for more detail.

Your doctor can order a simple test to measure your insulin.  Some doctors just request a measure of fasting insulin (blood insulin after a 12-hour fast).  While this has some value, insulin resistance is not the only cause of elevated fasting insulin.  Therefore, a better test is the insulin challenge test.  This is similar to the Glucose Tolerance Test used to diagnose diabetes, but instead of just measuring glucose levels, both glucose and insulin levels are measured after the 12-hour fast, and then for 3 – 4 hours after a high-carb meal (post prandial).

Note, insulin levels can be reported as uIU/ml or pmol/ml (there may be others as well). When comparing values, it is important to have the same type of measurement. To convert from pmol/ml to uIU/ml, divide by 7.175. Thus 60 pmol/ml equates to 8.4 uIU/ml.

Simple glucose:insulin ratio (from Mercola): the ratio of glucose to insulin (fasting) is an even more important indicator of problems. It should be less than 10:1; any value above that is cause for concern. (11)

For example, my ratios:

HOMA-IR (from Dr. Tom O’Bryan interview with Dr. Brian Mowll). Optimal range is 1 – 1.5; anything over 2 is considered insulin resistance. The US formula is:

There are also calculators online; search “HOMA-IR calculator”. For example: thebloodcode.com/homa-ir-calculator/ .There are other sites with the calculator, but be sure to pick one from the US, not the UK or other countries if you live in the US. The MD Calc link adds the following caution: “The HOMA-IR score should not be used in patients on insulin, and studies have questioned its accuracy in those with impaired glucose tolerance, normal BMI, the elderly, and others.”

For example, my HOMA-IR scores (from the data above):

Clearly, it gets worse every year, even though I switched to Ketogenic eating plan in 2013. However, my ND suggests this could be result of liver working to correct too-low glucose during night.

But if your fasting insulin is high, insulin resistance is a possible cause.

Post-Prandial Insulin (2 hours after a meal):

Elevated post-prandial insulin is an even more accurate indicator of insulin resistance. Here is a sample of results from my own insulin challenge test in 2003, indicating hyperinsulinemia (elevated blood insulin) and Insulin Resistance, but diabetes is not yet indicated (glucose levels are within normal ranges).  These are my own test results from 2003: 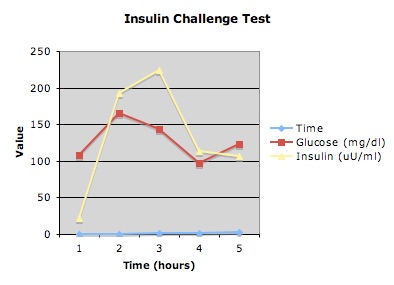 See How to Live Longer: 11 Ways to Reduce Insulin Levels.

When cells become insulin resistant, but those same cells still have a need for a particular nutrient regulated by insulin, the pancreas produces more insulin.  This interferes with the proper metabolism of glucose and fats at the cellular level, which shows up as an abnormal lipid profile, a risk factor for atherosclerosis.  In particular:

Insulin and T3 (thyroid hormone) increase the binding of LDL to receptors in the liver, which in turn increases production of VLDL (very low density lipoprotein, measured as TGs in a lipid panel). (1)  These effects may be mediated through the regulation of Apo B degradation.  This may explain the high cholesterol levels in the blood and increased risk of atherosclerosis seen with uncontrolled diabetes or hypothyroidism. (4)

The hormone insulin is responsible for regulating, either directly or indirectly, most anabolic and catabolic activities at the cellular level, which impact the rate of aging.  The most well-known of these is the regulation of blood sugar.  This is much in the news of late because of an epidemic disorder known as Insulin Resistance (Syndrome-X or Metabolic Syndrome), characterized by the following problems:

Verify and update all links as needed

See my 'About' page
View all posts by Cat →
This entry was posted in Uncategorized and tagged diabetes, insulin, insulin resistance, metabolic syndrome. Bookmark the permalink.