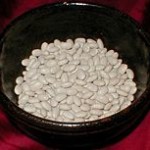 This is a variation on Minestrone Soup, but also is reminiscent of Pasta e Fagioli (Soup). I’ve not tried this yet, but I do like the combo of kale, beans and pasta in these other, more familiar soups. 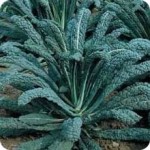 I love lacinato kale (black kale, pictured left, from Incredible Seeds (Canada)), but any kind of kale will do – or a mix of varieties. If you can’t find fresh cilantro don’t settle for dried, as it just doesn’t have the flavor.  Use flat-leaf parsley instead, tho it will provide a different flavor entirely.