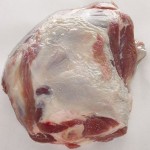 I’ve not yet tried this recipe.

I’m just beginning to explore Moroccan foods. I once tried a Moroccan restaurant near my office in Portland. I don’t recall what I ordered, but it came swimming in a burning hot red oily liquid that definitely put me off. I think it was supposed to be Harissa sauce.

Like many Moroccan dishes, this recipe combines the lamb with garbanzos (chickpeas), and cubed winter squash. You could use yams instead of squash, and lima beans instead of garbanzos, if desired. I love the added flavor from saffron in this recipe. Go light on the harissa the first time unless you are used to the heat of Moroccan foods. The heat from the Ras el Hanout spice mix used to marinate the meat might be more than enough…

This recipe is adapted from Cassablanca-Moroccan Lamb at Group Recipes(1). For more info on how to make Ras el Hanout, see my Herb & Spice Blends article. It is a sweet-spicy and hot flavor that can be made even hotter by the addition of more cayenne or other peppers. This spice blend is very similar to the Indian garam masala, with the addition of cayenne.

This recipe uses lamb shanks, which are fairly fatty and boney, not very meaty, and require a long, slow-cooking time. You can make it boneless (and less fatty) by using lamb stew meat, or speed up the cooking time by using lamb shoulder chops or leg of lamb steaks. This makes a LOT. I’ve cut it down a bit, but still…

One of the garnishes is harissa sauce. If you live near a middle-eastern market, you can buy it pre-prepared. Otherwise you must mix it yourself, and you have more control over its heat – it is quite hot. Check out the many recipes for harissa on Group Recipes (2). Basically, you need fresh or dried red peppers or flakes, garlic, coriander, salt and other optional spices. To make it a sauce, you add cider vinegar and let it sit a bit for the flavors to meld. OR you could skip the harissa and just use hummus for dipping your pita.

I’ve not tested this yet.