Lefse is a Norwegian flatbread made with potatoes, and cooked on a hot, dry griddle.  It resembles a flour tortilla, but is thinner, lighter and more moist.  It is a must with Lutefisk at Christmastime.  Some lefse is sweet, but most is slightly salty. To eat, you butter it with soft butter and roll it up.  You can sprinkle with cinnamon sugar or spread it with jam, but I prefer it just with butter.

The best commercial lefse is Lena’s (1). Mrs. Olson’s (2) is too floury for my taste. But the best lefse, by far, is fresh and homemade.

My Dad taught my Mom how to make lefse; and then my Mom taught me, but she used instant mashed potatoes.  I prefer my Dad’s original recipe, with real potatoes, but I often had trouble with the moisture level. I started a research of other recipes.

Adelaide Fystrom was one of my Sunday School teachers, and was also a grade school teacher.  When I was in college, she self-published a small book titled “Put on the Coffee, Ma!” (3) in which she included many of her family’s recipes, including one for Norwegian lefse.  I include it on Lefse: reference recipes. But she doesn’t offer any tips so I kept looking. 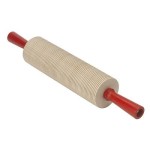 I decided to seek help from a member of the local Son’s of Norway, Donna H., who gives classes on making lefse. I provide her recipe on Lefse: reference recipes; the most important thing I discovered from her lesson was that a smooth rolling pin does not encourage the flow of air when the lefse is cooking; a much better result was obtained when I used a grooved rolling pin made for lefse and other flatbreads (photo, left, from Fjorn.com (6)

While changing to a grooved rolling pin helped, I was still having trouble with moisture (too much moisture and they have a cracker-like texture (if they don’t fall off the lefse stick when transferring them to the griddle). I found a great online tutorial at Lefse Time. com (4; also included on my post Lefse: reference recipes), and similar tips on ScandiStyle.com (5) These really helped me improve the end product with the following recommendations to help control the moisture problem and produce a soft, tender lefse.

Tips for the best lefse

About the ingredients & equipment

You want to use a drier, starchy variety of potato, rather than a waxy potato. Russets and other bakers are best; yukon golds have a bit of wax, but can be used in a pinch. Do not use red boiling potatoes, new potatoes or fingerlings, as they are all waxy. See OChef (7) or Chef’s Thesaurus (8) for more on different types of potatoes.

Steaming the potatoes helps to keep them from taking up the cooking water, but I find they are more uniformly cooked if boiled, but be careful not to overcook them to the point they start to fall apart. Don’t cut or peel them until after cooking, to avoid taking up moisture from the cooking water. Set them in a warm spot to cool just a bit, not too long, which encourages them to give up extra moisture. Put them through a ricer while they are still warm enough to melt butter.

Every batch of potatoes cooks up differently, and therefore the amount of flour varies.  It’s best to err on the side of too little flour, to avoid a tough lefse. My mom always said, “If a lefse falls apart between rolling and the griddle, it doesn’t have enough flour.”  If mixed dough sits too long, the flour will form a paste, and the cooked lefse will be tough.  Thus is is best to mix up only a small portion at a time (enough for 10-12 lefse).

Some recipes call for rich milk, others for cream; either will work, but if you use the rich milk, you will need more butter.

When you mix up the potatoes, use more salt than you would use for regular mashed potatoes. Generally I recommend Unrefined sea salt, but it doesn’t dissolve well in the rich riced potatoes, so I use non-iodized table salt for this recipe.

I do not recommend whole grain flour, but if you want to try it, use hard wheat flour. I use unbleached all-purpose white flour.

Each batch of riced potatoes has different moisture levels, requiring differing amounts of flour. Start with the lesser amount of flour in the recipe, then add more as needed. Go by feel of the dough when shaping and rolling. And note that if the lefse tears or falls apart when transferring it to the griddle, it needs more flour. 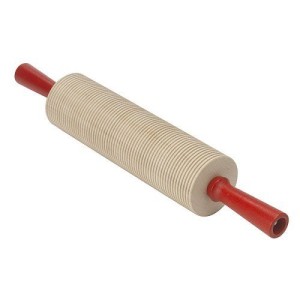 I recommend the following rolling pin and accessories (as in photos, above left, from Fjorn (6) and above right from Amazon (10)): 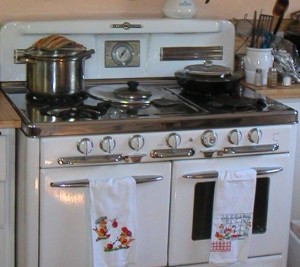 I use the griddle on my 1949 vintage O’Keefe and Merritt gas range (right, photo by Cat), but a large round electric griddle made especially for lefse also works (see photo at top of page); it’s easier to control the temperature on the electric griddle.

The best kind is made from strong wood (see photo, above, from Amazon (10)), but I use my Dad’s which has a wood handle and a long, thin stainless steel blade.

My Recipe for Lefse

See my 'About' page
View all posts by Cat →
This entry was posted in Boiled, Dairy, Fat or oil, Griddle, Root Veggie and tagged butter, cream, milk, potato, salt, sugar. Bookmark the permalink.