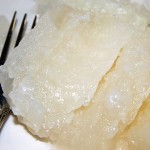 This is a staple for my annual Christmas Eve dinner, but for me, lutefisk season begins earlier in the fall, on the Saturday closest to Armistice Day (Nov 11), in the basement of Bethany Lutheran Church, Bigfork MT, for their annual Lutefisk dinner. The original founders of the church were of Norwegian, Swedish and Danish stock, so the dinner includes Norwegian-style lutefisk, Swedish meatballs, and Danish ham, along with plenty of side dishes, condiments, and Scandinavian cookies.

My friend Terry calls this dish “Ludicrous,” in jest.  And if you ever had this back in the 50s, you probably thought it was ludicrous too.  But ancient Norwegian methods have been revived for some brands (as opposed to Minnesota brands that use real lye – sodium hydroxide – for the curing brine).  The name means “lye fish” in Norwegian and Swedish.

In ancient times, the Nordic fishermen spent most of the year at sea. Before heading out, they built big fires near the shoreline to generate wood ash. They washed this with sea water to produce an alkaline brine commonly called “lye” (“lute” in Norwegian). They put barrels of this on the ship, and tossed their catch into the brine to cure.  When they returned to shore, they soaked the fish in several changes of plain water to remove the lye, before laying out the fillets to dry. The dried fish would keep well through the warm season without fear of spoilage.

However, the lye cure can be quite destructive to the protein in the fish if not made from the right kind of wood ash. Common lye is sodium hydroxide (NaOH). This is what accounts for its gelatinous texture, especially after cooking. (Better sources of wood ash make for better texture even after cooking. For example, certain trees have minerals that are less damaging to the proteins, such as magnesium and potassium, than sodium.

When it was time to prepare the fish for eating, they reconstituted the dried fillets by soaking in several baths of fresh water. Then huge pots of salted water were heated to boiling.  The cured  fillets were put into bags made of loosely woven cloth, and submerged in the boiling salted water for just a few minutes.  It didn’t take long to cook, because the lye had more or less pre-cooked it.  Unfortunately, if cured in sodium lye or a bit too long in the lye, or if accidentally overcooked, it turned to jellied goo.  If cooked just right, it was somewhat flakey, but could still jello-like in texture if the wrong lye was used.

It is worth noting that the Finns cure the fish in birch ash, which contains high amounts of potassium carbonate and bicarbonate that is far more gentle on the proteins in the fish than true lye (pure sodium hydroxide). The resulting cooked lutefisk is not as gelatinous and slippery as lye-cured fish, but rather is quite flakey and hard to tell from untreated cod. Birch-lye cured fish can either be cooked in the traditional way (in boiling water), or baked in the oven.

Norskstar Seafood in Whitefish MT (2), won’t share what they use to cure the fish, other than to say “it isn’t lye or lime.” It has to be some type of alkaline salt, but not as alkaline as lye, because it doesn’t turn the fish into jellied goo (the result of lye reacting on the proteins in the fish). Unfortunately, they are no longer in business, so I now buy Poulsbo Lutefisk from Port Townsend’s New Day Fisheries (3), which is similar to Norskstar’s lutefisk.

Some cultures serve lutefisk with melted butter or bacon grease; others with a white mustard sauce.  A flatbread called lefse is often served with the fish, as well as boiled potatoes.

I used to use this method as it is less messy. However, the broiling pan is very hard to clean after using it to cook lutefisk, so I use the ‘Cat’s boiling water method’ above.

[NOTE:  It can be a bit difficult to clean the broiling pan after cooking the fish.  I toss the soiled foil, rinse loose pieces from the rack and the pan, then put to soak overnight in very hot soapy water.]

This recipe is for the fish cured in true lye, such as that from Olsen Fish Co. in Minnesota (4). This is the stuff I grew up with, the kind that easily  turns into jellied goo.

For the cheesecloth, be sure to get the real thing, not the cheap flimsy variety found in hardware stores.  If you can’t find the real thing, you can use well-worn old-fashioned cotton dish towel, or drapery scrim, washed and dried before using.  Or order real cheesecloth from cheesemaking.com (5).

Serving Suggestions (for any of the lutefisk cooking versions)

Serve with any of the following:

See my 'About' page
View all posts by Cat →
This entry was posted in Uncategorized and tagged butter, lutefisk. Bookmark the permalink.