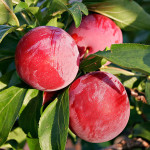 In the 1970s (when I was in my 20s), I worked at International Harvester, where one of the men in the shop was from Switzerland. He and I used to talk about our favorite foods, and one of his was fruit tarts. So on his next birthday, I made him a plum tart, but I didn’t know very much about European tarts, only that they didn’t use an American style pie crust. I bought a set of tart pans, the kind with a removable bottom and then pondered how to make a tart. This was decades before the internet and Google.

None of my cookbooks at that time had recipes for this kind of tart, so I was on my own.

I remembered my friend telling me his grandmother used to make the tarts, and she used a kind of cookie dough that she pressed into the pan, for the crust. So I read through cookie recipes looking for something that might work, and came across shortbread. So simple and rich, and the dough would be slightly crumbly, so that I could press it into the pan.

Then, what to do for filling? My friend had told me that the base of the filling had been gelatin-like. I called my Mom and asked her what she thought, and she suggested using red currant jelly.

So I made the shortbread dough, pressed it into the pan and pre-baked it until almost done. I let it cool a bit, then arranged sliced plums and peaches on top. I warmed the red currant jelly a bit so I could pour it over the fruit. And then I baked it until the plums were nice and soft. It was so pretty when I took it out of the oven. The next day I took it to work with some freshly whipped cream that I spread on top right before I took it to my friend and sang Happy Birthday to him. He was impressed, to say the least. It wasn’t the same as his Grandmother’s but he thought it held promise.

I saved up so I could buy a cookbook that would help me learn to make tarts, and that’s how I came to own Simca’s Cuisine, by Simone Beck, one of my Beloved Cookbooks.

As it turned out, I wasn’t too far off with my first tart.

This wonderful recipe is adapted from Fine Cooking (1), originally by Kimberly Y Masibay. While it is a rather lengthy recipe, it is but not difficult to make. You allow the shortbread mixture and the plum mixture to rest separately overnight before arranging and baking the next day.

You can add a tiny bit of lemon juice to the dough, which helps remove any bitterness from the stevia. It may also help to break down the phytates in the flour, making the minerals more bioavailable.

The original uses unbleached white flour for the crust; I prefer to use half whole grain pastry flour, half white flour. I also prefer to sweeten primarily with stevia with just a little bit of Rapadura sugar to give the proper texture to the tart shell (but I also provide the sugar equivalent for those who don’t mind using all sugar).

The key to this recipe is fresh-from-the-orchard plums. You could try canned plums in the off-season, but omit the sugar and overnight soak. Simply drain plums in colander over a medium bowl, then cook down the juices as indicated in recipe. However, I think the end result will be too mushy, so best to reserve this dish for late summer when the plums are ripe and fresh!

The original calls for 2 tsp firmly packed lemon zest for the tart shell, but some of the comments indicate it is too lemony. So consider using only 1 tsp zest the first time you make this, then adjust. The original did not use lemon juice, but you need the acidity of the juice for the presoak of the flour. If you don’t do the presoak, don’t add the lemon juice.

I’ve divided the recipe into three sections: Tart Shell; Filling; Assemble & Bake, each with list of ingredients, equipment and method for that section.