Rendering Lard in a Crockpot: The Process 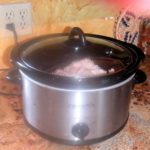 Fat in crock, with lid

Back in July 2010 I posted Rendering Lard – the Perfect (& Original) Shortening on the sustainability blog, The EssentiaList, which covered the following topics:

In this post, I detail the process that Shelli R. and I used to render 10 pounds of pork fat from Farm to Market Pork (2). We decided to try the crockpot method following instructions in “Livin’ High on the Hog: How I Rendered my own Lard” (1), and take photos along the way. We did this in Shelli’s kitchen using three crockpots.

See Rendering Lard, Suet or Tallow for a summary of the method; what follows in this post provides all the details, including photos of each step.

Collect all your equipment before starting:

We started with two 5-pound blocks of pork fat, and ended up with a little more than 4 pounds of rendered lard.

Render the fat in the crockpot(s)

We unwrapped the blocks of pork fat, which included bits of meat and connective tissue, and divided it between our 3 crock-pots. Here’s the last bunch of fat to be put into the pot: 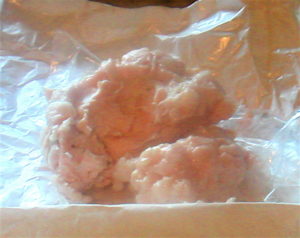 Here’s the fat in the crockpot: 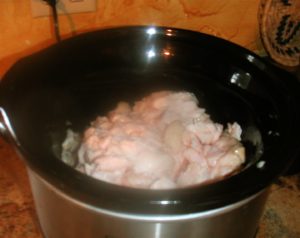 NOTE: Some instructions add water to the fat, to help prevent scorching, but this makes the process stink, so we opted not to add the water.

Set the temperature control to low, to begin melting the fat. Stir the fat occasionally to keep it from scorching, but remember that every time you remove the lid, you cool off the crock, so don’t overdo.

Eventually the fat will begin to bubble and the cracklings will begin to fry. The mixture will be about 200° F, and you want it to reach 260° F. However most crockpots will not achieve this on low, so when it starts to bubble, increase the heat to highand give it a good stir. It takes a minimum of 9 hours to reach this temperature; ours took longer because we left the crockpot on low longer than we needed.

[The reason for 260° is to ensure all the water has boiled off, per Joe Pastry website(see comments)]. 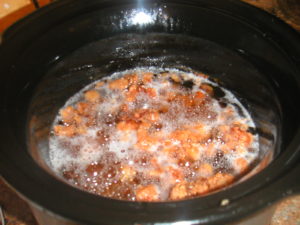 When the mixture reaches 260° F, it is ready for straining.

Line a colanderor mesh strainer with good quality cheesecloth (use double layer if the mesh is fairly loose). Set this over a large bowl with pour spout. We put a towel in the bottom of Shelli’s sink and set the bowl and strainer on top of the towel. This was to protect her glass bowl from the shock of hot fat against the cold porcelain sink.

Shelli picked up the crock using an oven mitt, and poured off the fat and cracklings into the strainer. 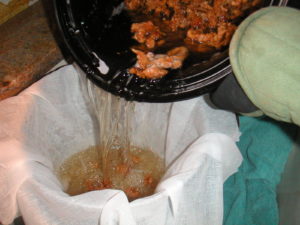 Straining the rendered lard from the cracklings

We let this sit for awhile, to allow all the fat to drip through the strainer.

Pour into jars or molds

While the lard could be stored in canning jars, we decided to make blocks of lard that could be wrapped for freezing. We used small bread pans as molds, and lined them with parchment paper to protect the hot fat, and for ease in removing the solid fat from the molds. 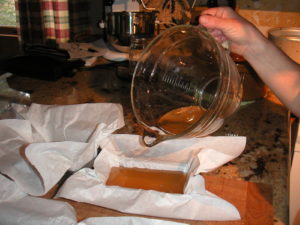 Note that the hot fat is amber in color: 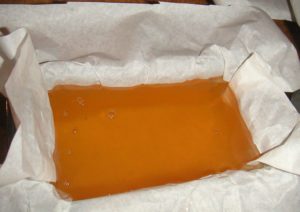 However when it cools and solidifies, it is a creamy white: 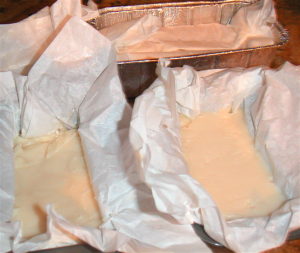 (NOTE: from Joe Pastry: How to Render Lard (in the oven) (3) has another great idea: Use muffin tins. He didn’t line his tins; just poured into them directly, put the tins into the freezer, then when frozen, transferred them to plastic bags. [Cat’s comment: to avoid the toxins from plastic bags and to reduce accumulation of plastic trash, store the lard in parchment/freezer paper, or Mason jars.] )

If you want to store your lard in jars, it’s best to pour it directly into jars while the lard is still hot, and screw on the lids. As the hot fat cools, the lids will seal, the same as with canning.

If you want to freeze it, it is best to pour into molds as we did, then transfer to the refrigerator to harden (room temperature lard is soft and not so easy to wrap). Then wrap in freezer paper, and label with the date.

We divided the blocks evenly between us, about 2 pounds each. I decided to wrap two of my blocks in freezer paper for freezing, and transfer the third to a jar for refrigeration. All are labeled with the date: 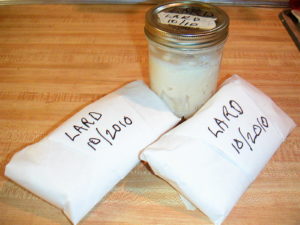 You can save the cracklings, if you like them, or compost them. Per Shelli’s suggestion, I will refrigerate my share of the cracklings for my cats. Like Shelli’s dogs, my cats LOVE them, and its good for their skin and fur, too. 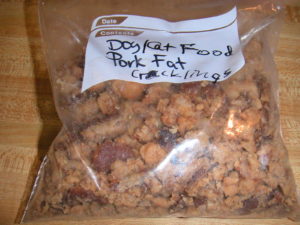 Saved cracklings for dogs or cats

Unless you need a lot of lard at the same time, Shelli suggests doing only one crock-pot full at a time, rather than 3 pots full like we did.

To save energy, she suggests doing this in the oven (300º F) when you are doing a roast so both are in the oven at the same time. You will need to consider that having two roasting pans in the oven will require longer roasting time, and your lard may need to remain in the oven longer than your roast.

See my 'About' page
View all posts by Cat →
This entry was posted in Fat or oil, Pork, Rendered, Uncategorized and tagged lard, render, shortening, tallow. Bookmark the permalink.